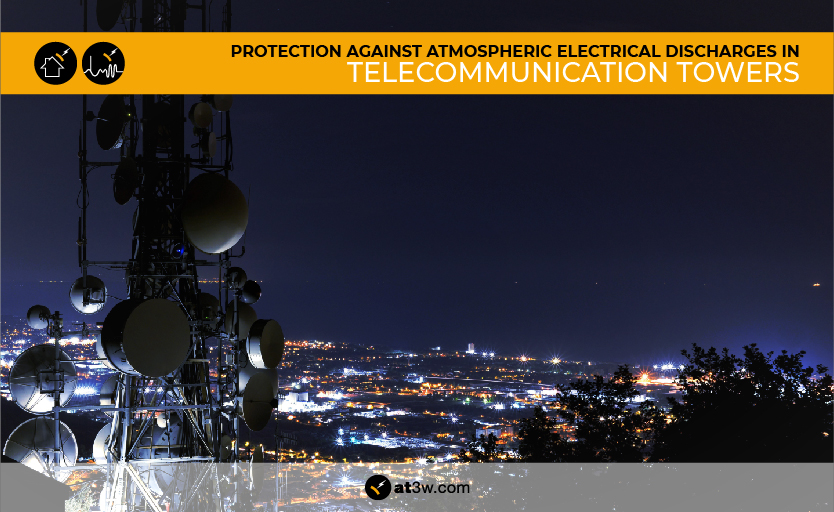 Telecommunication towers such as mobile phone, television or radio repeaters are high rise structures, often located in isolated places and equipped with sensitive elements susceptible to atmospheric electrical discharges. Their maintenance and repair usually requires technician call outs to remote locations, which creates an important cost and loss through downtime.

Lightning and overvoltage protection avoids many of these failures and deterioration of electronic components, thus prolonging life of the installation and equipment.

Aplicaciones Tecnológicas supplies all the necessary elements of lightning protection for telecommunication towers and the contained equipment:

What lightning protection does a telecommunication tower need?

Telecommunication towers are metallic structures and therefore they may act as natural lightning protection components. However, the problem is not the impact on the tower, but on the antennas. Aplicaciones Tecnológicas recommends the installation of a DAT CONTROLER® REMOTE Early Streamer Emission lightning rod at the top of the tower. In this way, the lightning rod becomes the preferential point of the electrical discharge (lightning), thus avoiding the direct impact on antennas that would conduct the lightning current to the equipment.

The lightning rod must always be located at least two metres above any other object within its protection radius and therefore must be above any antenna.

The antenna poles must be attached to the lightning protection system, which is usually achieved via the metal structure.

DAT CONTROLER® REMOTE lightning arrester is a lightning conductor with an ESE(Early Streamer Emitter) device that bases its functioning on the electrical characteristics of lightning formation, emitting the continuous upward leader before any other object within its protection radius, a characteristic that is called the advance time of the priming device.

The greater its anticipation in the formation of the upward leader, the greater the distance at which it captures the downward leader, protecting against lightning in a larger area.

The DAT CONTROLER® REMOTE ESE Air Terminal from Aplicaciones Tecnológicas is a lightning rod that can be tested remotely, i.e. it is completely autonomous, maintenance-free and it’s correct operation and status can be checked at any moment through a web portal where you can manage alarms, notifications, reports, etc.

After lightning strikes the air terminal, its current will be driven to the ground through the whole metallic structure of the tower. However, the UNE21186 standard, which regulates installations with ESE devices, specifies that at least one down conductor per lightning rod must always be installed to ensure a direct and verifiable path.

Aplicaciones Tecnológicas recommends the use of tinned-copper tape as a down-conductor. Tape has a larger surface for the same amount of conductive material as the cable, and therefore has less resistance, less inductance and generates a smaller electric field. Copper offers the best conductivity and being tinned it is more resistant against corrosion and reduces the risk of theft.

The tower must have a good earth connection for the equipment, even in mountainous areas that have  low conductivity terrains. It would also be convenient for the lightning down conductor to have its own grounding with a suitable configuration to dissipate the lightning current as quickly and effectively as possible.

The external lightning protection system does not avoid the effects of distant or cloud-cloud lightning, nor the electromagnetic fields produced by the lightning current on its way from the ESE to ground. Antennas and associated equipment must therefore be protected against transient surges.

Combined technology direct lightning protector, capable of withstanding a peak current of 30kA per peak pole with a 10/350 wave μs and with a residual voltage lower than 1.5kV.

Protector in both common and differential mode. Capable of withstanding a peak current of 30kA per peak pole with 8/20 wave μs and with a residual voltage lower than 900 V. With visual warning and connection for remote signal.

DC power supply line protector in modules with coordinated protection for a pair of lines. Able to withstand a current of 20kA per pole with wave 8/20μs and with a residual voltage less than twice the nominal.

They protect the coaxial lines of the antennas, without causing distortion or loss of signal power. Wide range of products with different connectors, capable of supporting a current of 10kA per pole with 8/20 wave μs and with a residual voltage lower than that supported by the equipment to be protected.

For more information about lightning protection on telecommunication towers you can consult our technical specialists here.