Storm detection system: key in the risk prevention of airports 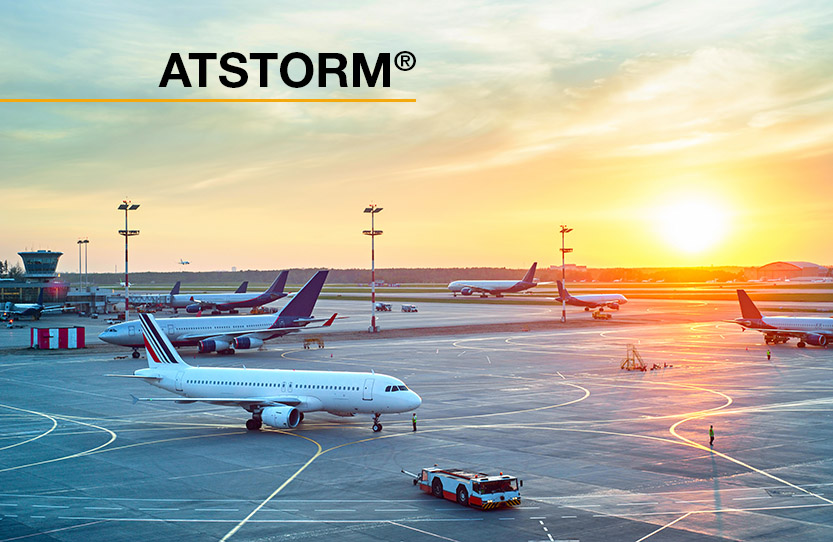 The storm detection in airports is the key to prevent accidents of the workers and guarantee their security in the track. The labour accidents produced by lightning in airports can be prevented by the early warning system ATSTORM® developed by Aplicaciones Tecnológicas.

We can not avoid storms, but we can anticipate it with the maximum time possible, so temporary preventive actions are put into place to minimize the damage produced by lightning.

The ATSTORM® detection system offers early warning risk alerts of electrical storms, through a real-time analysis of the local conditions, place where the device is installed.

Why a storm detector is needed at an airport?

The airport aprons are huge open spaces very sensitive to being strike by lightning in an electrical storm. Therefore, it is vital to protect the people who regularly pass through them.

In terms of occupational risk in airports, a reliable storm detector is an indispensable tool used to minimize the risks.

Below, we describe some situations that occur in airports, where it is important to foresee a storm for security reasons:

The refueling of an aircraft is an operation that involves a big risk due to the flammability of the fuel. Therefore, in an electrical storm it is essential to stop and postpone refueling activities, as lighting could cause an explosion or fire.

Boarding and disembarking of passengers

Sometimes in the boarding and disembarking of passengers, instead of using the tunnel or the boarding bridge, the passengers access the aircraft through marked pedestrian paths on the ramps. In this case, a storm detector guarantees the security of the passengers, since if there is any lightning probability, the airport managers could decide to stop those boarding methods.

Staff in the aprons of airports

All of the work done in the aprons endangers workers that have a high risk of receiving the strike of lightning. With a storm detection system, it is possible to evacuate workers before the storm starts and before it arrives to the site.

Guarantee the continuity of services

When a lightning storm is produced, it is important to protect sensitive goods, such as equipment and electronical material, that can be damaged by an overvoltage. The storm detector offers information before it happens so prevention jobs can be made, with the final objective of guaranteeing the continuity of services during and after the storm.

A storm consists of four phases: Initial phase, growth phase, maturity phase and dissipation phase. A storm detector should be able to alert every phase of the storm itself, specially in the initial and growth phases.

In the initial phase, after receiving an electrical storm alert, the most common prevention actions used are the warning to the personnel in charge of the premises and the possible suspension of operations that can compromise the security.

In the growth phase, the most common preventing actions are usually the cover of all workers on and nearby the ramps, stopping the boarding and disembarking of passengers that do it through the ramp and stopping the refueling of aircrafts.

On the other hand, storms in airports are related to delays and flight cancellations. In this case, even though stopping those services is for security reasons, it generates complains and disconformity of the passengers. In that sense, knowing the storm situation in advance means that the customer service department is prepared too.

How a storm detector works?

The dual detection system of ATSTORM® measures the electrostatic and electromagnetic fields, through two types of sensors that enable evaluate the risk of electrical storm.

The joint action of both sensors, makes the ATSTORM system really reliable and offers alarms with enough time to implement the necessary preventing measures within the airports security protocols.

ATSTORM® allows you to stop activity only when the risk is active, which means a reduction of costs.

ATSTORM® it is based on local measurements in real time, not statistics. These measurements are what determine when you can return to normal activity, unlike other methods, which are only based in electromagnetic sensors.

Who needs a storm detector in an airport?

ATSTORM® it is a precise and reliable system that provides the people responsible for security at airports to make decisions that guarantee effective preventive actions that do not entail wasting time. Therefore, a storm detector is essential for:

On the other hand, the international standardization IEC 62793:2016 includes the steps to evaluate the need for a storm detector based on three variables: identification of dangerous situations, determination of the type of losses and risk control.

Why ATSTORM® is so different to other storm detectors?

ATSTORM® is an expert local warning system that offers lightning alerts and electrical storm alerts with the maximum anticipation and reliability through real-time monitoring and analysis of the local conditions in the area to be protected.

The characteristics makes it the most reliable detector in the market.

ATSTORM® is a class A storm detector

ATSTORM® detects all of the different storm phases, that is why it is considered a class A by the standardization IEC 62793, because it measures the electrical field and provides warning in every phase.

Storm detector without moving parts, electronic and with own autonomy

The shape of the ATSTORM® detector affects its characteristics and functioning, since there are no moving parts, no wear and no obstructions that affect its usage. In addition, it is not affected by meteorological conditions, so therefore, no maintenance needed.

The ATSTORM® detection system is completely electronical and autonomous. The device has a few solar panels that makes it totally autonomous.

ATSTORM® has a management alert system through a private web, app, or a remote relay module.

The multiple detection unit system makes the measurements really precise and the alerts highly reliable. In this case, it removes false alarms or excessive prevention measures that increase cost.

ATSTORM® is not only a storm detection system, it also accompanied by a service that does not have to take care of maintenance. The ATSTORM® service performs a continuous monitoring of the detection system.

For more information about ATSTORM® system, contact us. We will study your case in order to offer the best possible solution that covers your needs.