What are thunderstorms and how are they formed? 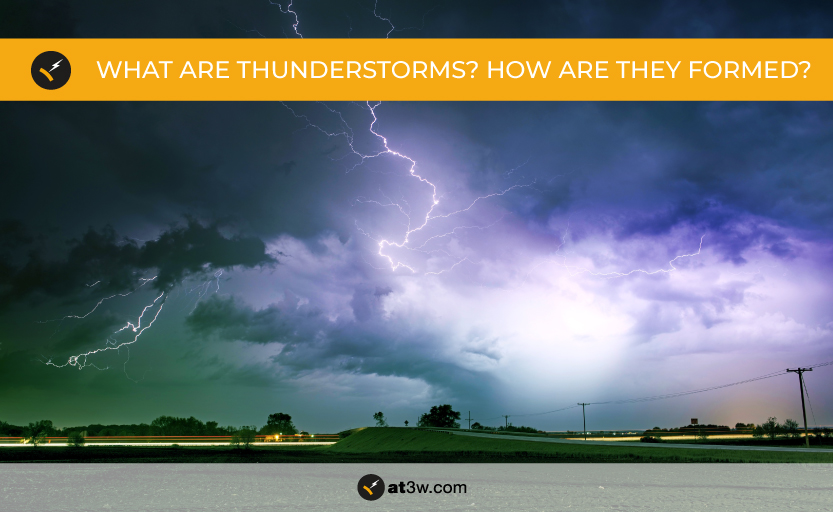 A thunderstorm is manifested by a sudden discharge of electricity, which we perceive by an intense and fleeting glow, commonly known as lightning or lightning strike, and by a powerful sound, thunder.

After suffering arduous natural phenomena for decades, in 1988, the government of Mexico created an institution dedicated to generating specialized knowledge about them. This institution, known as CENAPRED (National Center for Prevention of Disasters), develops techniques to reduce its risks and help the population to understand the causes that generate them.

Severe storms (among them thunderstorms) occupy a large part of their publications.

In the field of meteorology: definition

According to CENAPRED, thunderstorms are associated with a specific type of cloud, convective storms, also known as cumulunimbus, that could go hand in hand with a downpour of rain, snow, granulated snow, granulated ice or hail.

They are regional and according to the NOAA (National Oceanic and Atmospheric Administration), 2,000 storms can coexist simultaneously in the world.

Awareness of the danger in the face of this atmospheric phenomenon must be a priority for anyone who resides in an area of ​​high keraunic (or ceraunic) level.

How do thunderstorms form?

Under normal conditions, there is a balance in the atmosphere between positive and negative charges. Whereas, during a thunderstorm, the lower part of the clouds are negatively charged and induce a positive charge on the earth and the elements above them.

Above a certain level of electric field, the air is no longer insulating and the clouds are discharged over the earth with an electric arc that we call lightning.

According to the same CENAPRED publication about thunderstorms, it defines the storm duration cycle between one or two hours, and specifies that all thunderstorms contain lightning, which can occur individually in groups or in lines.

How does a cloud get electrically charged?

Convection is the transport of heat by the movement of fluids in areas at different temperatures. When the Earth’s surface is heated by solar radiation, so is the air flows close to it. If the temperature increases in the lower layer of the atmosphere, a thermal rise takes place that produces the condensation of the existing water vapour in the atmosphere.

When cloud formation therefore begins, there are updrafts of warm air that transport ions from the base and these are trapped by the water particles.

The surrounding negative particles are also attracted to the outside of the cloud, being trapped by the particles on the surface and carried by downdrafts to the lower areas. The separation of charges is what gives rise to the electrification of the cloud.

An external electric field can induce charges on the cloud particles that, when colliding with each other, generate a transfer of that charge, intensifying the electrification of the cloud.

These types of mechanisms do not require any external electric field, and are based on the charge transferred by the adhesion of water particles to the surface of small ice crystals.

There are different types depending on their nature *:

They are those weaker storms, of short duration. It is still endowed with lightning and can cause heavy rains, but its cell does not feed back with energy.

Its peculiarity lies in having two or more cells. Multicell storms are more intense, of a longer duration (they can last several hours), and can be complemented by strong winds, hail and even small tornadoes/twisters.

These are storms that feed back on themselves. A circuit of currents ascends in a way that maintains the energy charge and can precede other types of phenomena such as strong tornadoes/twisters.

These types of storms are particularly destructive.

We refer to these types of storms when there is a line of active storms that is usually accompanied by hurricane force winds, heavy rains and even strong gusts of wind.

Its name comes from the form that the electrical storm itself acquires, curved or arc-shaped.

Lightning reaches temperatures close to 30,000 degrees Celsius, a very high temperature that gives rise to its characteristic white light due to incandescence of the discharge path.

The hot air that helps the formation of thunderstorms expands causing a shock wave that appears in the form of sound, this is the phenomenon that gives rise to thunder.

CENAPRED defines storms as the combination of humidity produced between hot air that rises rapidly from the earth’s surface and a force capable of lifting it, such as a cold front, a sea breeze or a mountain.

Safety measures against a thunderstorm

The formation of electrical storms cannot be avoided, but we can anticipate a possible lightning strike on an area of ​​interest. This anticipation allows us to minimize risks and avoid accidents by implementing temporary preventive actions.

To this end, Aplicaciones Tecnológicas provides innovative solutions in protection and prevention against electric shock: the Atstorm® system.

The Expert local early warning system for lightning storm risk prevention ATSTORM®, is capable of detecting all the phases of the storm in real time. It belongs to the category “class A” detectors described in the UNE-EN IEC 62793 standard and has recently been awarded as the best solution in occupational risk prevention by the Spanish magazine Formación en Seguridad Laboral (FSL).

If you want to be contacted by an expert in lightning protection and thunderstorms, click here.

Remember that the only way to take temporary preventive measures that avoid or minimize the effects of a thunderstorm is through a detection system. We must rule out unreliable and outdated methods like the 30/30 rule.