32 percent of damages in photovoltaic plants are caused by lightning. 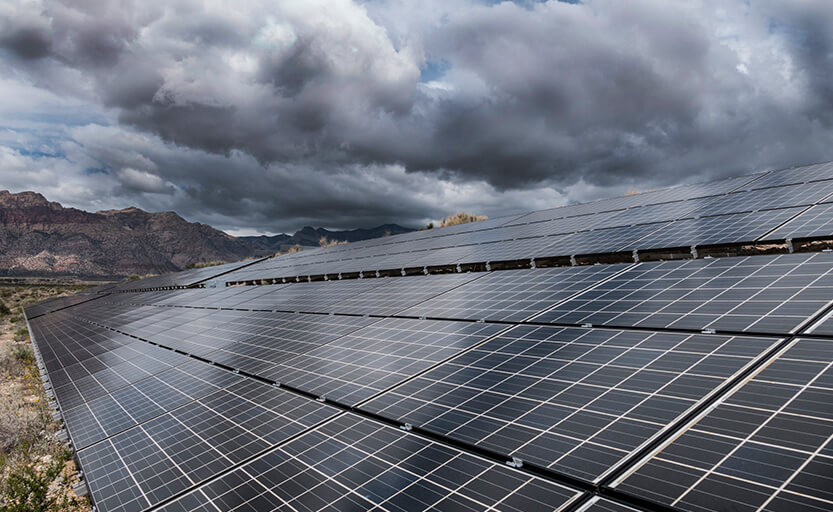 Global warming has become one of the most important concerns in society. Therefore, the use of renewable energies which do not produce polluting emissions or greenhouse gases, is booming.

According to the International Energy Agency (IEA) renewable energies are the second global source of electricity and, according to the International Renewable Energy Agency (IRENA), the generation of clean energy raised in 2017 by more than 8%, exceeding 2.179GW worldwide. Among all renewable energies, photovoltaic stands out, accounting for 32% of the total with an annual growth of 10%.

Photovoltaic installations are exposed to meteorological conditions which may affect their efficiency. They are situated in large areas with a high level of solar radiation, free from trees and objects of greater height – all characteristics related to the risk of lightning strikes.

More than 32% of damages to solar panels are caused by lightning, placing atmospheric discharges as the first cause of deterioration (South African Institute of Electrical Engineers). Sites with a capacity of 100MW or more can be directly connected to the electrical grid, to which, a lightning strike could affect as well as the site itself.

The direct impact of lightning and its inductive effect could damage and even destroy the photovoltaic modules, charge controllers, and other electronic components.

These damages imply economical losses due to replacement costs and the repair of defective parts, aside from reductions to the lifespan and the efficiency of solar panels. This last aspect is of great importance since the return on investment of a photovoltaic system occurs approximately in 20 years, which would only increase when considering damages or deteriorations.

The effect of atmospheric discharges to solar farm sites means that protecting them by use of surge protection and lightning rods is indispensable.

A lightning strike, whether it is on a photovoltaic plant or close to it, can cause a surge in the electric system and produce damages or destruction of the electronic components of the installation.

Such are the damages, that the international standard IEC 60364-7-712 recommends the use of surge protection systems, and the Association of the German Insurance Industry require its incorporation in photovoltaic installations of 10kW or more.

In contrast with other power generation systems, solar farms use direct current (DC). Therefore, surge protection for solar farms must specifically consider DC type protection and should be installed in every system which may be affected by lightning.

Photovoltaic plant components which must be protected against surges.

It is also recommended for every photovoltaic plant to have shielded cables so the partial lightning current can move along the wire screen without damaging the solar cells.

To prevent lightning from impacting the modules of photovoltaic plants, it is recommended that lightning rods be installed on the central inverters or other site areas.

During the design phase, it is essential to optimize the location and the number of lightning rods so that the smallest possible shadows are produced, thus avoiding or minimizing their adverse effects on energy production.

Whether shadows are produced by a lightning rod or other object, they can be diffuse or defined.

On one side, these shadows will cause the solar panel to produce less energy, and consequently less revenues. However, a defined shadow has the most important effect – when some of the solar cells are shaded, they start to consume energy, creating hot spots.

To avoid this, the bypass diodes are activated offering the power an alternative route, minimizing the possible damages. However, depending on the quality of the bypass diodes and the solar cells, the protection of the hot spots may not be enough. If this is the case, the electronic components of the photovoltaic panels could deteriorate and even become destroyed. In addition, these diodes actually consume energy.

For this reason, it is necessary to optimize the number and location of lightning rods. The use of devices with a large protection area like ESE lightning rods, are recommended since they will allow us to use less lightning rods.

One of the advantages of the DAT CONTROLER® ESE lightning rod of Aplicaciones Tecnológicas compared to other lightning rods is that its maintenance can be carried our remotely.

Earthing systems are a fundamental part of electrical installations, including photovoltaic systems. Its function is to dissipate currents in the terrain, either from atmospheric or defective discharges. By doing so, earthing systems prevent differences in potential from damaging installations and harming people.

Photovoltaic plants have direct current so they must be grounded at a single point, meaning they must have a unique earthing. If this is not the case, the charge controllers, the inverters and other sensitive components of the solar plant could be damaged.

The best way to do this is by using permanent or welded joints to ensure durability. Exothermic welding, unlike mechanical joints, create bonds that do not degrade or deteriorate over time.

In case the photovoltaic plant is directly connected to the electricity grid, national low voltage electrical regulations normally specify that the neutral ground of the energy distribution company must be independent of the solar plant.

The earth resistance is of great importance in any electrical installation since it determines the ease of the current dissipation. The resistivity of the ground depends on its humidity and on the materials which compose it.

To reach this value, is recommended to use ground enhancement materials, such as APLICEM®.

If you are interested in protecting your photovoltaic installation against lightning, do not hesitate to contact us.