Fires in residential sectors related to lightning strikes. How are they produced and how can they be avoided? 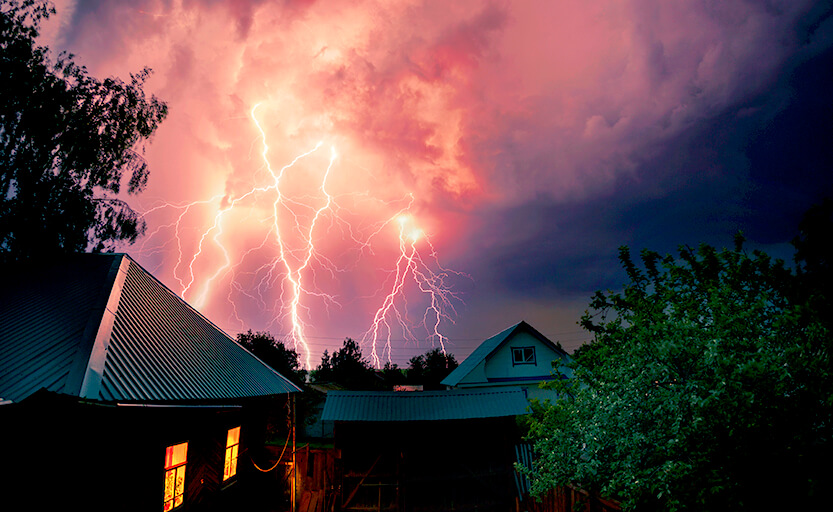 Lightning strikes are powerful atmospheric discharges. Even though they are natural phenomena, they can pose great risk when they strike on Earth due to their power. In the residential sector, lightning can have important consequences among which fires are included.

In news everywhere around the world we have read about fires caused by lightning strikes in private houses, residential buildings or other buildings such as churches or historical monuments.

In these cases the electrical discharges pose a risk for people. Fortunately, thanks to the swift action of the fire services the number of victims is very low (35 people injured by fires caused by lightning in 2014 in the United States) compared to the high number of fires in houses caused by lightning. However, lightning implies great cost and loss for insurance companies which could be avoided by using appropriate protection.

Why can lightning cause fires in houses?

Lightning can reach very high temperatures, generating an electrostatic and electromagnetic field. However, how can this explain that fires in houses are produced? We will now examine why these fires are produced during thunderstorms and how to prevent them.

Fires in building structures after a lightning strike.

The discharge of a lightning strike travels at a speed of approximately 140.000 km per second and its temperature is higher than the surface of the Sun. Therefore, it is understandable that the lightning impact on a structure is able to damage it and even set it on fire after the collision, especially when it comes into contact with inflammable materials such as wood.

If the lightning strike itself does not compromise the structure of the building, the resulting fire could be able to trigger the risk of collapse.

Overvoltages: a cause of fire in houses.

Lightning is the cause of lots of electromagnetic disturbances in the electric systems. Whether a lightning strike on a structure or close to it, this can cause disruptions which lead to transient surges in the electricity grid. If a house or building is not protected against voltage peaks, these could be the cause of an electrical breakdown, a fire, or even cause damage to all the devices connected to the power line.

In many cases, we have insisted on the importance of a correct earthing system to ensure the security of the electrical systems. With regard to prevention in domestic accidents caused by lightning it is essential to point out that a PAT installation conforms the function to drive the beam energy to the ground and dissipate it without endangering the power supply and people. In the event of a lightning strike, a poor earthing system could cause the electric line to overheat enough to result in a fire.

How to prevent lightning from causing a fire in a house or building.

In order to understand how to prevent fires originated by lightning strikes in the domestic environment, we are going to explain how to implement and combine external and internal lightning protection.

How to protect a house against lightning with an external protection system to avoid the risk of fire.

When it comes to prevent lightning from damaging the structure of a building, it is essential to install an appropriate protection system especially designed for the needs of that particular site. For that purpose, it is necessary that an expert team carries out a lightning protection system project according to the standards which will point out the level of protection needed and how to approach the installation.

Accordingly, the aim is to capture lightning before it hits any part of the building or other structures, extending the protection area as much as possible. Nowadays there are high tech systems which allow us to anticipate lightning. These devices are known as ESE lightning rods and are the best option to intercept electrical discharges and drive them safely and effectively.

First of all, the foundation of a safe installation is an earthing system designed according to the electrical safety standards with a correct layout of the necessary elements and in which the quality of the earthing materials used ensures a low impedance.

In all cases, a lightning rod must have its own earthing system connected to the general earth system through a spark gap.

Likewise, it is necessary to carry out the maintenance of the lightning rod and the earthing system periodically as it is indicated in the standards. An external lightning protection system which is not in good condition is inefficient.

As we have seen, electrical discharges are able to produce damages in the electrical circuit of houses and even short circuits which can cause fires. Nevertheless, there is the possibility to protect the electrical installations and prevent all these problems.

Inside the houses and buildings, it is essential to have protection against overvoltages to minimize the increase in the power surges generated by thunderstorms and to avoid the lightning current to reach the electrical and electronic equipment through the supply lines or telecommunication lines.

After carrying out the electric scheme study it is usually recommended to install a coordinated surge protection system for internal protection to completely protect a building. This way, we not just preventing the risk of fires but we protect all the equipment inside or outside the buildings.

Surge protection is becoming more relevant. Currently, houses have more electronic devices and this is largely due to the rise in automation and smart cities.

With regard to fire prevention, it is important to raise awareness about the importance of preventing possible sources of fire occasioned by the strike of lightning. As we have seen, residential fires originated by thunderstorms can be prevented with appropriate protection.

Finally, it is important to highlight that lightning is not a danger only in the residential environment. Some professional areas are especially prone to the risk of lightning strikes. For example, in opencast activities such as airports, outdoors events or the mining industry, or sectors working with highly flammable materials such as the petrochemical industry.

If you need any advice about surge protection or a lightning protection study do not hesitate to contact us. Out team of experts is willing to help you.