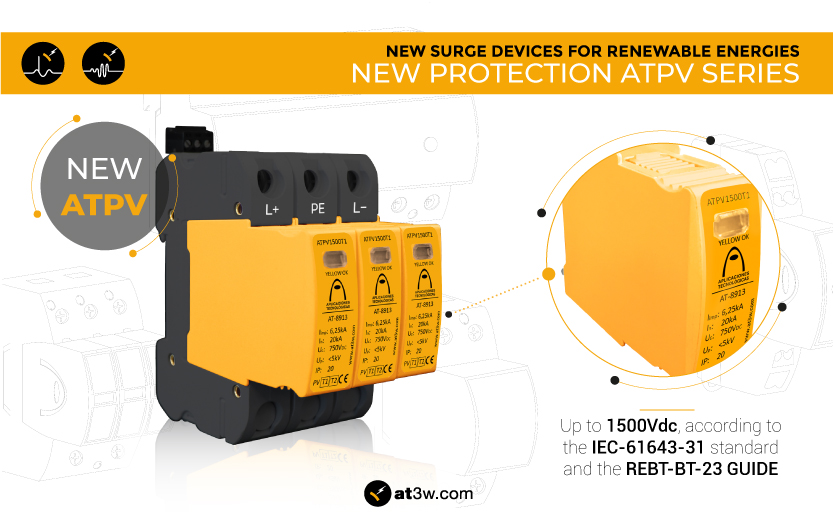 Renewable energies present new challenges in the field of lightning and surge protection for direct current lines. Therefore, Aplicaciones Tecnológicas S.A. has developed a new range of surge devices for the protection of direct current (DC) systems up to 1500Vdc, according to the IEC-61643-31 standard and the REBT-BT-23 Guide.

Photovoltaic power plants are high-risk installations from the point of view of lightning protection, as they are large areas of land exposed to atmospheric disturbances, such as lightning strikes. They are also difficult to protect without influencing on the performance of their generation performance due to shadow casting. Considered as high cost equipment that, when suffering an electric shock, can interrupt or diminish the energy supply, especially if they are connected to the distribution network. In addition, the discharge of a lightning strike could seriously affect sensitive electronic equipment that controls its operation, causing transient surges that would represent an avoidable risk if covered by means of an optimal surge protection.

Aplicaciones Tecnológicas S.A. has all the elements to achieve the best protection for solar plants among which you will find a wide range of surge protection devices capable of protecting anything from data lines connected to electronic components to the outputs of the transformer station and general power supply, either AC or DC.

With a continued objective to improve the range of our products against surges caused by lightning, Aplicaciones Tecnológicas extends the ATPV family with new 1+2 type equipment, reaching up to 1500Vdc lines.

For more information about our new ATPV surge protectors, you can contact us by clicking here.