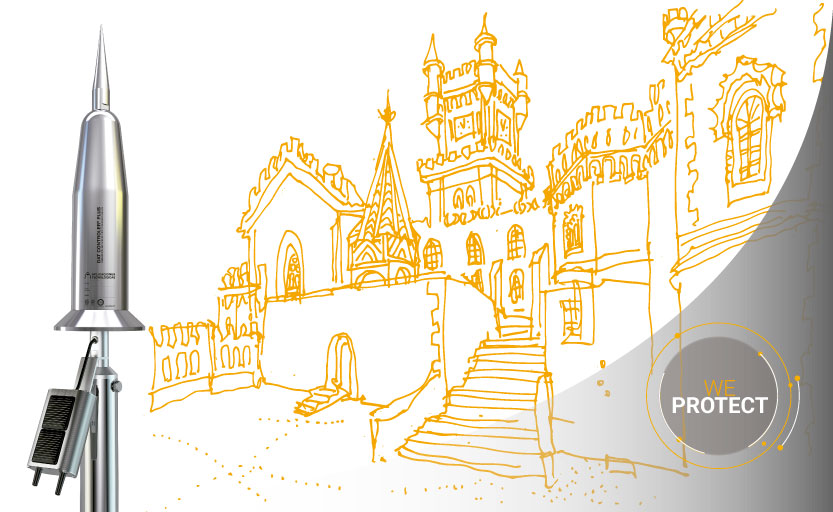 After the fire of Notre Dame cathedral in April 2019, the need to protect landmark buildings from fires has been highlighted. The causes of these fires are usually human failure or faulty electrical installations, but landmark buildings have also been destroyed by fires caused by a lightning strike.

In fact, the Cathedral of León suffered in May 1966 a very similar fire to the one in Notre Dame Cathedral which destroyed the roof of the tallest naves. This fire was caused by a lightning strike.

The cathedral of León dates from the 13th century and is located at the highest part of the city, so it is very prone to being struck by lightning. The cathedral has a lightning protection system from Aplicaciones Tecnológicas since 2012. That same year the monument suffered a direct lightning strike on its north tower and the DAT CONTROLER® PLUS derived the lightning discharge to earth, which prevented damage to the building and its facilities.

Lightning protection in buildings and monuments of great historical value.

Lightning protection is necessary to prevent damages in assets and historic heritage due to the great number of tourists attracted by its high cultural value.

The Nossa Senhora de Aires Sanctuary, located in Viana de Alentejo, Portugal, is an 18th century landmark building. With a Portuguese baroque style, it represents a meeting point for many pilgrims. The building is now protected by the DAT CONTROLER® REMOTE 60.

The National Pantheon of the Heroes in Paraguay

The National Pantheon of the Heroes and Oratory of the Virgin Our Lady Saint Mary of the Asuncion is a landmark building located in the capital city of Paraguay. During its restoration in 2017 an ESE lightning arrester was installed to protect this construction of great architectural and heritage value.

The emblematic church of San Roque in Lisbon, as well as the museum, have a DAT CONTROLER® PLUS lightning rod to protect the building and the assets inside it. This church, property of the Lisbon Holy House of Mercy, was built in 1540. In addition to the church, this area also houses the San Roque Museum, with assets that are part of the city´s cultural heritage.

Da Pena Palace, located in the mountains of Sintra (Portugal), is placed on the top of a hill in a natural park with a high probability of suffering from an electrical discharge. It is a 19th Century building declared a World Heritage Site by UNESCO and it is of great beauty and historical and cultural value, so its preservation is paramount. For its protection, a DAT CONTROLER® PLUS 60 has been installed.

The lightning rod DAT CONTROLER® PLUS has been installed in the castle located in the upper part of the city, on a hill by the sea. The fortress, of Templar origin, began its construction in 1294 and was completed in 1307. Pope Benedict XIII resided there, converting it in a center for the papacy for years. It was declared a National Historic-Artistic Monument in 1931 and it receives thousands of visitors every year.

The importance of a lightning protection study to achieve the best protection.

Every mentioned example is an architectural monument which should be protected against lightning strikes to prevent heritage losses and also to protect the people visiting these monuments.

Each project has its own specific characteristics which will determine the most adequate lightning rod and materials for each case.

The ESE lightning rod DAT CONTROLER® PLUS is characterized by the following certifications:

On the other hand, the Nossa Senhora de Aires Sanctuary and the Malacky Castle in Slovakia are protected with DAT CONTROLER® REMOTE ESE lightning rods, which in addition to all the certifications and benefits of the DAT CONTROLER® PLUS, are capable of making daily self-tests and sending them via M2M communication to a website where all the information about the status of the lightning rod is recorded.

For further information about lightning protection systems in historical buildings and cultural heritage do not hesitate to contact us on the following link.