ESE Air Terminals: what requirements do they have to fulfil? 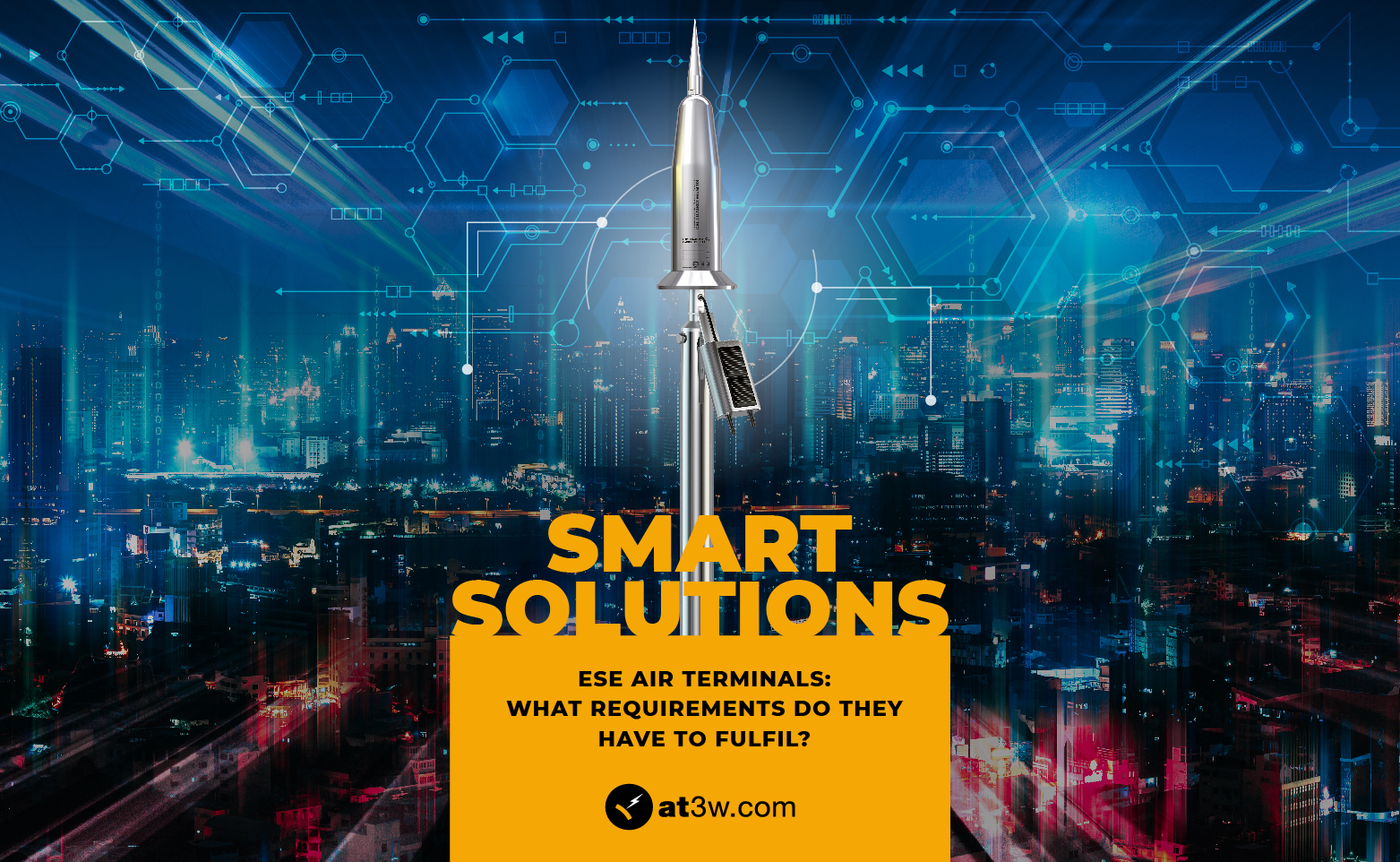 Lightning arresters, whether passive, such as Franklin rods, or active, such as Early Streamer Emission (ESE) devices, are part of the permanent lightning protection measures, together with surge arresters1. They are permanently installed on structures and equipment to be protected against the destructive effects of lightning. Both Franklin and ESEs must comply with the specific regulations to ensure their correct installation and operation.

Lightning is an atmospheric electrostatic discharge that originates from the build-up of electric charge in clouds. When the charge exceeds an electric field threshold, electrical discharges can occur when the downward leader or tracer leaves the cloud and comes close enough to the ground for one or more grounded points to produce corona discharges that will become the upward leader or tracer. Connecting both creates a discharge path along which the lightning current will flow from the cloud to ground.

Early Streamer Emission (ESE) Air Terminals represent an important technological innovation in lightning protection compared to passive lightning rods or Franklin rods. They emit the upward tracer continuously before any other object within their protection radius, thus covering a larger area of coverage.

The defining parameter for ESEs is their time of advance (ΔT), i.e. the difference between the emission time of the upward leader and that of a Franklin rod, measured in a high-voltage laboratory under the conditions described in the stringent lightning protection standards for ESEs (UNE 21186:2011 and NF C 17-102). The longer the ESE anticipates the formation of the upward tracer, the longer distance it will capture the downward tracer. By doing so, the advance time of the ESE determines its protection radius.. This time provides a higher protection volume, applicable even in open areas and objects on rooftops and around buildings.

The DAT CONTROLER® REMOTE smart Early Streamer Emission (ESE) Air Terminal is an innovative technological development of the R&D&I department of Aplicaciones Tecnológicas S.A. It contains an electro-pulsating generator that emits high-voltage electrical impulses, for which it is powered only by the atmospheric electric field. This generator is in standby mode in non-storm conditions. When storm conditions start, the generator is activated and remains in a pre-control state until the downward tracer is within its range. At that time, it emits the upward tracer which will form the path for the lightning discharge. The lightning current passes down the outer body of the ESE to be conducted to earth, without damaging the internal circuit.

Unlike other ESEs, DAT CONTROLER® REMOTE is a fully autonomous, maintenance-free, self-diagnostic device with Internet of Things (IoT) connectivity.

Requirements to be fulfilled by ESE lightning arresters

Any Air Terminal with an ESE device must at least meet the current standards. The latest edition of the UNE 21186, NF C 17-102 and NP 4426 standards requires the tests to be carried out consecutively and on the same sample. In other words, it is not valid to use a different arrester for each test, as it is essential to ensure the inalterability of the elements against different environmental agents and extreme conditions of use.

Specifically, four tests are carried out:

On the same sample, it is carried out:

Once the test is passed, it is continued on the same sample:

However, performing only the tests required by the standards is not enough to guarantee the correct operation of an ESE Air Terminal at all times and under the most demanding conditions. For example, although only 3 impulses of 100 kA are required in the standard tests, the same standard defines Protection Level I as being able to withstand 99% of lightning strikes, which according to statistics corresponds to a peak current of 200 kA.

In addition, heavy rain conditions could cause the arrester to short-circuit, turning the ESE Air Terminal into a high-cost Franklin rod. This is because an Early Streamer Emission (ESE) device requires two isolated electrodes: one at atmospheric potential and the other at ground potential. The power supply to the arrester is provided by the high potential difference that occurs between these electrodes in storm conditions. If the insulation is lost, this will result in a short-circuit of the ignitor, which will lose its main characteristic (the time of advance, ΔT). The protection area will therefore be drastically reduced to that provided by a conventional Franklin rod, leaving unprotected areas. To avoid these effects, it is necessary to guarantee the insulation of the ESE Air Terminals in the event of rain, snow, ice, hail, etc., which could render the internal circuit unusable.

For this reason, the ESE DAT CONTROLER REMOTE lightning arrester of Aplicaciones Tecnológicas S.A. not only meets all the demanding tests of the regulations with the highest quality controls, but also has a series of additional characteristics that make it a unique and the most complete ESE Air Terminal currently available on the market.

The daily self-diagnosis eliminates the need to access and dismantle the lightning conductor, allowing the optimisation of preventive and corrective maintenance of the installation. The smart system allows centralisation of the real-time status of all installed devices through a customised web page, where all installed lightning arresters can be monitored and alarms, notifications and reports can be managed.

In addition to the advanced features of DAT CONTROLER® REMOTE, the installation can be completed with the SMART LIGHTNING LOGGER, which monitors the electrical activity in the down conductor of the lightning rod, recording the amplitude, polarity, charge and specific energy of the current pulse, as well as the date and time of the impact. Using IoT communication, it sends the data obtained, providing real-time information and alerts of lightning strikes at multiple locations.

For more information, you can contact us at this link.