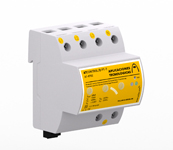 Combined three-phase protector against permanent and transient overvoltages, actuating on any shunt release.

The warning system for permanent overvoltages consists of  two LEDs: green for correct power supply and red  indicating overvoltage. It is also provided with a test button to check that the installations have been executed correctly.

ATCONTROL/B PT-T protector also acts whenever it detects a transient overvoltage, driving the current to earth and reducing the voltage to a level that does not damage the connected equipment.

Tested and certified as Type 2 protector in official and independent laboratories, according to the standard IEC 61643-11.

It is provided with a thermodynamic control device that disconnects from the electrical network in case of degradation, as well as a warning system indicating if the protector should be replaced.