Places in the world where lightning strikes the most 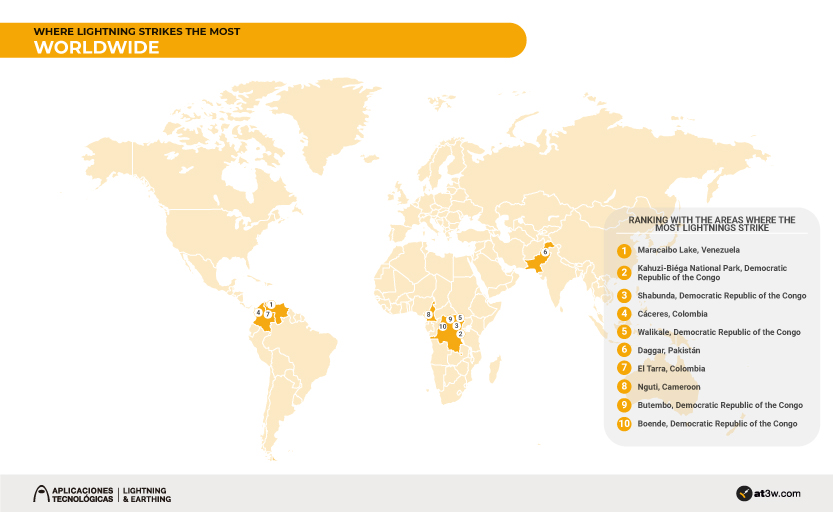 Get to know the worldwide lightning map.

Summer period is traditionally the season where good weather and holidays are most enjoyed, but it is also the time of year where more cumulonimbus convective clouds are formed which produce lightnings.

Every summer, news about fatal outcome accidents involving people due to an inadequate protection, resurface. Moreover, these discharges are one of the leading causes of forest fires, and are even formed a few days after the storm due to the so called latent lightning strikes.

Thunderstorms formation is unavoidable, but it is possible to maximize precautions in order to prevent from its destructive effects by means of the use of protection systems. This is mainly in prone areas to this weather events, but…Which are the areas where lightnings tend to strike the most in Spain and worldwide?

Where lightning strikes the most in Spain.

Our country is well-known in Europe for its warm and sunny weather, although the north of Spain is colder and rainier. Rainfalls are more frequent, but …Are those areas also the most prone to thunderstorms?

According to the available data, the greatest number of thunderstorms are focused on the northeast of Spain: Aragón, Cataluña and Comunidad Valenciana. Especially in Pyrenees and the south of the Iberian Mountain Range is where they appear the most, with an average of more than 30 days of storm per year.

The cause of a greater number of storms in these areas is related with the convection that takes place during the summer. The sun heats the highest mountain fields of our geography, which are also closest to the cold air flow causing the condensation and formation of cumulonimbus clouds.

Where lightning strikes the most worldwide.

According to NASA data, around 40 lightnings strike globally per second and more than 2,000 thunderstorms happen simultaneously every day around the globe. This electrical activity seems to have an established pattern: from the annual number of storms registered, approximately 1.200 storms happen above mountain fields near the equator.

Recently, and thanks to the new data obtained from high resolution satellite images, it was discovered that South America is where a higher number of lightning strikes happen, and not in Mitumba (Central Africa), like previous belief.

An extreme example is Lake of Maracaibo (Venezuela), where over 233 bolts per square kilometer strike each year, according to data obtained by the Tropical Rainfall Measurement Mission (TRMM) of the NASA.

According to this institution, the ranking with the areas where the most lightnings strike is established as follows:

Even though Africa has lost its first place in this ranking, it still is, with a huge difference, one of the continents with more incidents caused by lightning strikes.

To learn more about lightning, thunderstorms and, most importantly, to learn about protection against this natural event, click here and subscribe to our newsletter.