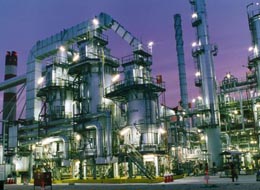 An oil refinery contains loads of highly flammable and explosive materials such as gasoline and diesel, as well as gas, mineral oils and asphalts. There are also inert gases such as nitrogen and other explosive gases like hydrogen sulfide and benzene inside the tanks where oil and gas are stored. On the other hand, the loading and unloading of fuel or when transporting material become highly dangerous situations in case of lightning storm.

This is the case, among others, of the Rizhao’s refinery in China, where an ATSTORM®v2 storm detector designed by Aplicaciones Tecnológicas has been installed. Our detector records the measurements of the evolution of the electric field, setting up before the lightning storm happens the alert level that activates the refinery’s security protocol. In the case of refineries, the different alert levels trigger preventive actions to reduce explosion risk, such as stop of activity or the personnel evacuation.