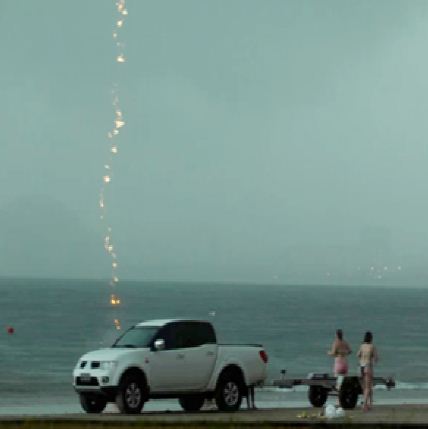 Short after the lightning strike to a seaside resort in Argentina, which caused the death of three persons, internet showed the images, taken by a photographer, where a woman dies at Sao Paulo coast due to a nearby lightning strike.

As happened in the Argentinean beach, deceased are not victims of the lightning direct strike but of the dispersion of lightning current in the ground. When such dispersion happens, voltage between the two feet of a person standing directly on the soil can reach thousands of volts. This magnitude is known as  “step voltage” and it causes the death of many animals during thunderstorms. It can also lead, as in these and many other cases, to losses of human lives.

Protecting any type of beaches with air terminals is unfeasible due to economical and aesthetic reasons. However, a storm detector can cover a larger area, warning about the danger in order to avoid people staying around the lightning strike area. ATSTORMv2 detects even storms still under development and it is fully electronic, without mobile parts that may get blocked or damaged thus causing alarm failures. Thanks to these characteristics, the storm detector can give advice with enough time to take the necessary preventive measures.