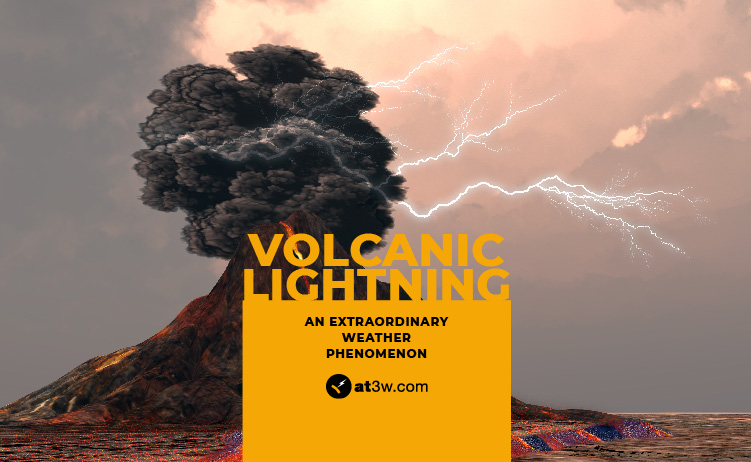 It is known that climate change is responsible for the accentuation of some meteorological phenomena such as electrical storms, torrential rains, droughts or hurricanes. Although the climate has gone crazy, some unusual and spectacular natural atmospheric phenomena were already taking place.

What is volcanic lightning?

A study in the Science journal indicates that volcanoes’ electrical charges originate when fragments of rocks, ash and ice particles collide in a column of volcanic smoke. This is when static charges are produced in the same way that lightning strikes in a common electrical storm, except that on these occasions they are produced when only ice particles collide. Likewise, volcanic eruptions also release large amounts of water, which can help drive the production of these thunderstorms.

The first recorded observation is from the year 79, when the Roman historian Pliny the Younger described the eruption of Mount Vesuvius. This event was reflected in letters and shocking images of that moment in history: entire crowds observed a cloud furrowed by rays of fire and that hid under its cloak the sunlight in Pompeii. The first scientific studies of volcanic rays or dirty storms were carried out in this same volcano, carried out by Professor Luigi Palmieri during the eruptions of 1858, 1861, 1868 and 1872.

Already in current times, an investigation published in 2008 in the Bulletin of Volcanology, pointed out that between 27% and 35% of the eruptions are accompanied by these flashes (lightning strikes). Spectacular dirty storms have been photographed in various parts of the world, such as the Chaitén volcano in Chile, Colima in Mexico, Mount Augustine in Alaska and, in Europe, the Eyjafjallajökull volcano in Iceland and Etna in Sicily.

How is volcanic lightning produced?

The friction between the hail particles and the water droplets located in the upper part of the cumulonimbus (storm clouds), induces the ionization of the air and establishes important differences in potential between some parts of the cloud and others. This ends up generating the rays within the clouds and also those that reach other clouds or discharge into the ground.

In the case of volcanic lightning, conditions must exist in the ash clouds similar to those that occur in the interior of the storm cloud.

The ash and pyroclasts that a volcano emits are initially neutral (without electrical charge), but the friction between them in a certainly hostile environment (fiery) causes the release of ions within the volcanic plume.

Only when this happens, that is, when the volcanic cloud has differences in electrical charges, volcanic lightning is produced.

Consequences and curiosities of volcanic lightning

An important consequence of these thunderstorms is that they can affect communications: lightning can interfere and have a negative impact on aviation.

Likewise, radio communications would be affected both in the air and at nearby airports. A study carried out by Stephen R. McNutt and Earle R. Williams, from the Alaska Geophysical Institute and the Massachusetts Institute respectively, confirm that “lightning and electrification in volcanoes are important because they represent a danger in themselves, they are a component of the global electrical circuit, and because they contribute to the aggregation of particles and the modification of the ash columns. ”

Erupting volcanoes are capable of causing phenomena of enormous magnitude. A study published in Scientific Reports by Andrew Pata, a postdoctoral researcher at the Barcelona National Supercomputing Center, describes that evaporated seawater from Indonesia’s Anak Krakatoa volcano charged a volcanic storm that lasted six days and caused more than 100,000 lightning strikes between 22 and on December 28, 2018. Therefore, the eruption of some volcanoes also allows us to observe the formation and evolution of electrical discharges of great magnitude in the atmosphere.

Subscribe to our newsletter to keep up to date with the latest developments in the sector by clicking here.