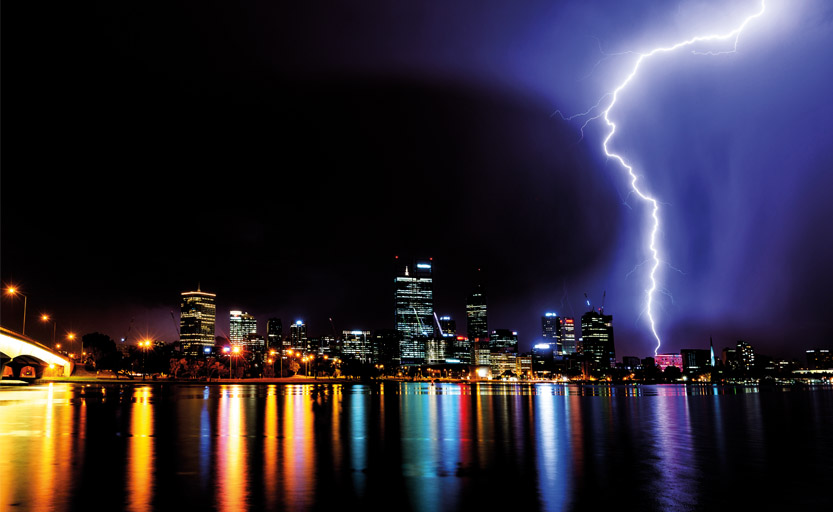 At its start, the lightning bolt travels through a downward leader that propagates in jumps in any direction. When the bolt approaches the ground it can hit any object. The aim of the lightning rod is to become the point of discharge of the bolt in order to achieve a controlled impact without damage.

The ESE air terminal emits a continuous upward leader with time of advance to anticipate the descent of lightning and capture it before any other object within its protection area. The time of advance of the ESE determines the protection radius of the ESE air terminal: the more the upward leader anticipates, the higher the downward leader is captured and prevents lightning strikes in a larger area.

The DAT CONTROLER® REMOTE ESE air terminal is an innovative development made by the R&D department of Aplicaciones Tecnológicas.

How does a DAT CONTROLER® ESE air terminal work?

DAT CONTROLER® is an electropulsant lightning rod with the last generation ESE certified for a supported current of 20 impacts 100kA (10 / 350μs).

The ESE air terminals from Aplicaciones Tecnológicas contain an electropulsing generator which emits electrical impulses. In normal conditions the generator is in standby mode. When storm conditions initiate the generator gets activated and remains in precontrol state. The moment the downward leader is within the range of the device, the upward leader is formed, creating the path for the discharge. The current of the bolt passes through the outside of the metallic frame and through the gap to conduct itself towards the ground, without damaging the internal circuit.

The DAT CONTROLER® REMOTE ESE air terminals, unlike other ESE air terminals, are totally autonomous and do not require maintenance. In addition, due to their design, they characterize themselves by enduring extreme environmental conditions:

Times of advance (ΔT) in the ESE air terminals from Aplicaciones Tecnológicas vary in the different available models:

The protection radius is calculated for every height and protection level with the time of advance following the graphical or analytical calculations described in the regulations.

DAT CONTROLER® REMOTE, daily verifies autonomously the state of the air terminal, or air terminals when it comes to a protection system with several devices installed. The results obtained from this test are sent to a web application where the installed lightning rod can be monitored for its correct maintenance, as well as managing alarms, notifications and reports.

When is an Early Streamer Emission air terminal recommended?

The electronic ESE air terminals DAT CONTROLER and DAT CONTROLER REMOTE can be installed in any type of structure, providing a desired and controlled point of impact for the lightning strike.

Besides, the ESE air terminals allows protecting the opened areas, as well as the objects located on the building rooftop and in the surroundings due to the fact that the time of advance provides a largest protection volume.

Some of the most complete lightning protection standards which are related to ESE air terminals are listed as follows:

If you need any further information or carry out a lightning protection project, do not hesitate to contact us. Our expert team will be able to assist you.