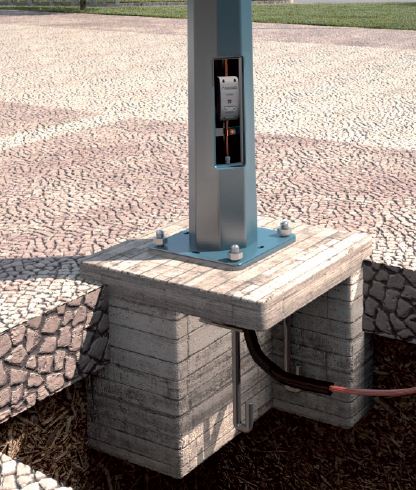 Lightning event counters are very useful tools in lightning protection installations, since they allow to find out easily if the installation has suffer a lightning strike and therefore if there is a need for a verification or extra maintenance beyond the periodical inspections according the provisions of the standard UNE 21186:2011.

In order to solve this possible situation, Aplicaciones Tecnológicas has developed a new model of lightning event counter, referenced as AT-034G, which is provided with the same functionality, performance and features as its predecessor (AT-001G), but with the important advantage that it does not require to interrupt the down-conductor for its installation. This is thanks to its fixing metallic plate that embraces the down-conductor, which greatly facilitates its use in existing installations.

Another advantage is a more ergonomic design and its smaller size (156 x 66 x 61 mm), enabling its use in tight spaces such as inspection pits, inside self-standing masts, etc. Furthermore, the display screen has been placed in a way that makes it easy to read the numbers on, even if the counter is at a certain height.

The device is formed by two main parts: a supporting plate and the counter's box, which is made of injected polycarbonate specially treated to extend its life and improve its performance in open-air. The device is held in place just by four screws, so the down conductor stays between both elements.

In summary, if you wish to complete your existing installation with a lightning event counter but you have limited space or you are concerned about the visual impact of this element, AT-034G is the model that best suits your purpose.