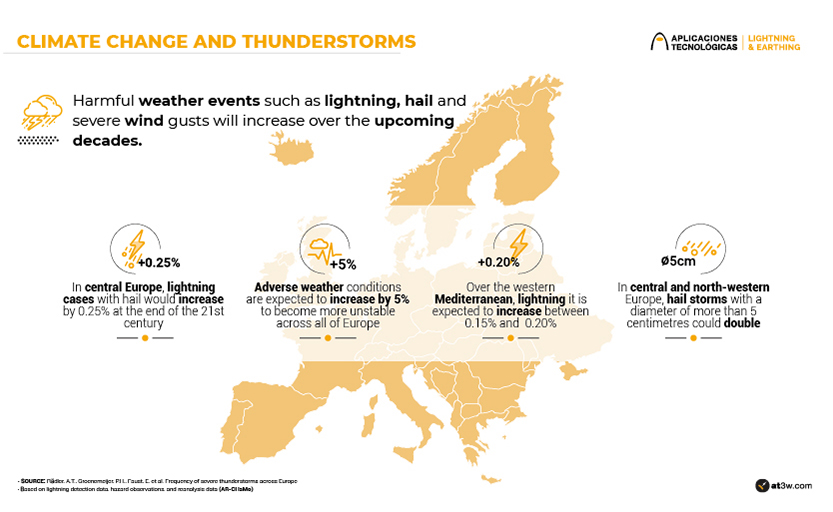 Numerous studies ensure that harmful weather events such as lightning, hail and severe wind gusts will increase over the upcoming decades. One of the most recent is the study of the expected increase in storms in Europe, based on the detection of lightning and the observation of damages:

Rädler, A.T., Groenemeijer, P.H., Faust, E. et al. “Frequency of severe thunderstorms across Europe expected to increase in the 21st century due to rising instability”. npj Clim Atmos Sci 2, 30 (2019). In this article, they estimate that By 2071–2100, a strong and robust relative increase is expected across northern and eastern Europe (of >20%).

Other interesting values to consider about this article:

Large hail with a diameter of 2 centimetres or more, are expected to increase by 40% to 80% along with strong gusts of wind.

In central Europe, the percentage of lightning cases with hail would increase from 0.05% to 0.15% initially, with increases up to 0.25% by the end of the 21st century.

In central and north-western Europe, hail storms with a diameter of more than 5 centimetres may double.

Over the western Mediterranean, lightning it is expected to increase between 0.15% and 0.20%.

In a world of increasingly sophisticated buildings and equipment, lightning is a high risk. A discharge can severely damage buildings and cause faults in electronic equipment. It can also cause fires from sparks and impose high economic losses.

Electrical effects: equipment destruction. Increase in ground voltage and surges can damage the equipment connected to the electrical network.

Thermal effects: fires. Sparks and heat dissipation by the Joule effect can cause fires.

Electrodynamic effects: damage to buildings. Deformations and breakages in the structure due to the force generated by the high magnetic field produced.

Effects on people and animals: electrocutions and burns. Current of a certain intensity passing through the body for a short period of time is enough to cause the risk of electrocution due to cardiac or respiratory arrest. Besides this, there is risk of burns.

Inductive effects: Within a variable electromagnetic field, induced currents appear in every conductor. If these conductors reach computers or other electronic equipment, irreversible damage may be produced.

If you want to avoid risks by protecting your building or business from thunderstorms, we recommend you to carry out a lightning protection study.

We have all the existing technologies in this field and innovate every day, being our mission to give the appropriate solution to each particular case, for a comprehensive, safe and complete protection.

What does a lightning protection study contemplate?

Our experts study all the particular characteristics of each project and also determine further proposals such as the installation of internal protection or preventive protection, recommended the latest especially for companies with workers at open areas or emplacements containing flammable materials.

The elements of a lightning protection system are the following:

The functioning of ESE Air Terminals is based on the electric characteristics of lightning formation. Lightning initiates with a downward leader, propagating in any direction. Once it approaches objects placed on the ground, any of them can be struck. The objective of an external lightning protection system is to control the lightning striking point thus providing the lightning current a path to the ground without damaging the structure.

What regulations must they comply with?

The functioning of ESE Air Terminals must be tested and installed according to specific regulations. In Spain, the current standard is the second edition of UNE21186, published in 2011. For new buildings, a risk study according to Section SU8 of the Technical Building Code (CTE) is mandatory. In this same section are given some basic rules of installation of the protection system.

Other standards applicable to the functioning of ESE arresters:

For he rods and meshed conductors consist in spreading and dissipating the current of discharge of the ray by a network of conductors.

If the protection is based on Franklin points and laid or meshed conductors, the Spanish regulation to be applied is the UNE-EN 62305, with the materials described in the UNE-EN 62561 series. In Spain, the basic rules for risk calculation and installation are also laid down in the ETC.

Internationally, IEC 62305 is applied for conventional protection, although many countries also have national regulations.

Down-conductors  aim to ground the lightning current from the collector system to the ground.

Finally, earthing conducts and disperses the lightning current to the ground. It must have a low resistance (less than 10Ω) and avoid as much as possible the voltage of passage and contact.

If you want to receive the latest news from the sector and be informed of the upcoming free online webinars about lightning protection, click here to subscribe to our newsletter.