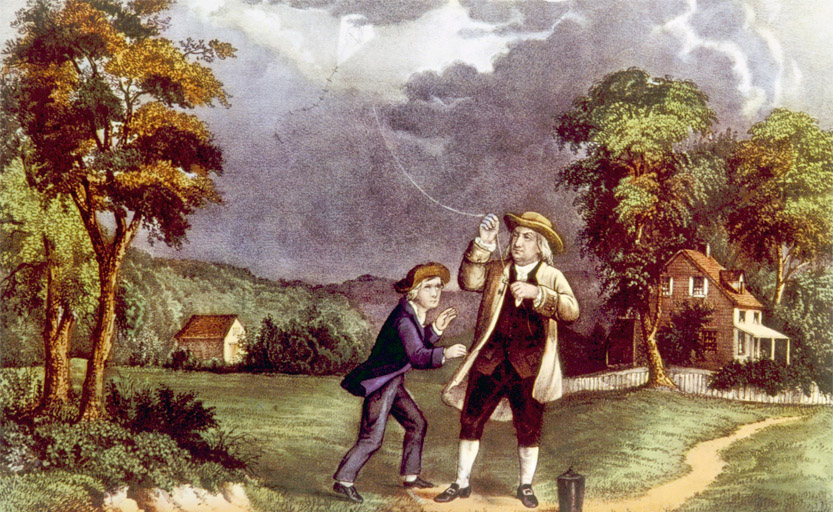 Before going into explaining the technology, its convenient to understand how the lightning rods where created and how they work.

What is a lightning rod and how it works?

A lightning rod is a device which protects people, buildings and installations from the lightning strike, it diverts lightning harmlessly into the ground.

Lightning rods work by attracting the beam to prevent it from hitting any object inside the protection area. These elements of external protection are formed by a metal object, generally peaked which is connected to a system of down conductors and grounding, which conduct the current safely and dissipate it.

The first lightning rod was invented in 1749 by Benjamin Franklin in the United States, in his honor, it was called Franklin lightning rod.

The Franklin lightning rod is a really simple system base in a metal tip connected to the ground. Currently, it is still used alone or as part of a system of tips and meshes.

In normal conditions, in the atmosphere there is a balance between positive and negative charges. But, during a thunderstorm, the lower part of the clouds has a negative charge which induces a positive charge on the earth and the elements above it.

From a certain level of electric field, the air ceases to be an insulator and the clouds are discharged onto the earth with an electric arc, which we call lightning. The object that forms the ascending plotter will be the one that will receive the impact of the beam. The cloud load will look for the most direct way to land, a path that, if not controlled, can cause serious damage.

There are two types of lightning protection systems, classified according to their operation mode.

In both cases, once the beam is intercepted, down conductors and grounding are required to avoid damage due to lightning current. In the case of lightning rods with early streamer emission terminals, by having the impact spot controlled, the rest of the external system could be easier.

The lightning rod with early streamer emission has been one of the technological advancements in lightning protection. Its functioning is based in the electrical characteristics of the lightning formation, using the existing knowledge about the lightning physics, in order to cover a bigger surface area.

DAT CONTROLER® PLUS from Aplicaciones Tecnológicas is a lightning rod with an early electropulsating emission device, it uses the electric atmospheric as a power supply and emits impulses of high voltage in order to form the ascending path in the correct moment.

It passes through severe quality control mechanisms, and it is tested under the rain with many current impulses, to check it functions correctly.

The DAT CONTROLER® REMOTE is the last product from Aplicaciones Tecnológicas related to lightning protection. DAT CONTROLER REMOTE offers the possibility of checking the state of the lightning rod in every moment and wherever you are. This innovation enables, not only the monitoring of the elements, it also saves time and maintenance cost of installation.

The lightning rod with early streamer emission device need to be installed two meters above from any other element inside its radius of protection. For the fixation of the device they use masts and anchorages.

The DAT CONTROLER® REMOTE has a remote tester with solar panels, it is recommended to install it in a place where there is no shade and orientate the device towards the sun.

The ESE, as it happens with every other lightning protection system, it needs to have an installation of down conductors and a grounding system. Moreover, this technology of active lightning rods, can be combined with other protection mechanisms, such as the meshes. In this way, we ensure that the beam will be received with as much security as possible.

Its convenient to install a lightning counter, because the standard says it is needed to make an inspection in the lightning protection system when it has received an impact. AT LOGGER is an equipment that monitors the electrical activity of the down conductor, registering the amplitude and polarity of the current impulse, and the date and hour it happened.

Both lightning protection systems should fulfill their specific standard:

In addition of the installation, these norms should cover also the tests that the lightning rods need to go through to determine the parameter its characterized for: its time in advance.

Before buying a lightning rod, plan your project with the CDRISK software which enable to calculate the risk the structure has taking into account the current standards, or consult our experts.

To be informed of the last innovations, subscribe our newsletter.