Hazards of thunderstorms on farms and livestock 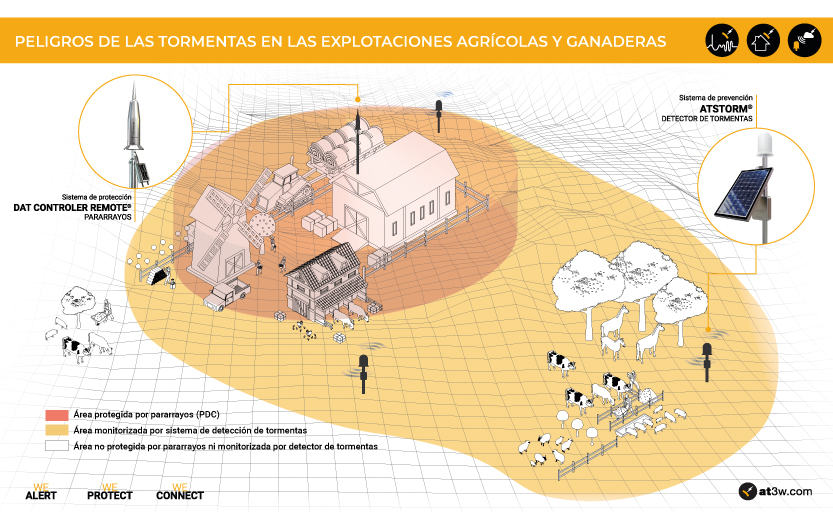 Agricultural and livestock farms make efficient use of the resources provided by their natural environment. The animals that are raised in freedom and in adverse weather conditions are at risk of being directly or indirectly struck by lightning.

Agricultural and livestock farm risks in the event of thunderstorms:

If the lightning strikes the ground or a wooded area near the livestock, the lightning current dissipates on the ground causing huge potential differences in a small space. The voltage between the legs of an animal becomes kilovolts. This is especially dangerous for four-legged animals since the current flows through their hearts and causes death due to this great potential difference.

In addition, the direct and indirect effects of lightning can cause damage to sensitive electrical and electronic equipment (automatons, computers, etc.) that are increasingly used in agricultural and livestock farms.

Lightning kills 129 goats in a village in Cáceres:

“The farmer has contacted both the Jaraíz de la Vera veterinary office and his insurance company “to see if they can help in any way” since the loss of these 129 head of livestock means the loss of “over a fifth” of his livestock.”

Lightning strike causes the death of 22,000 chickens in a farm in Traiguera:

“The farmer of Traiguera will have to face loss valued at 100,000 euros. Calculating an average of 2 euros per kilo of chicken (market price) and two kilos per animal, the loss could be of more than 45,000 kilos of meat and 90,000 euros”.

“Of the 141 dead nelore race animals, 140 were heifers that had been impregnated by artificial insemination and were due to give birth next August.

The damage to the farm’s owner must have reached 34.450 dollars according to regional ranchers. (EFE)”

“16 livestock were killed by lightning that struck the ground in a cattle farm located in the municipality of Coromoro. None of the cattle could be saved from the discharge; losses amount to $25 million”

How can livestock deaths caused by lightning be avoided?

Protection against lightning in this type of installation is sometimes complicated due to its extension, direct contact with the ground, mobility of equipment … Each case can present different problems and should be studied separately. However, there are protection measures that can and should be applied to prevent damage to people, animals, structures and equipment.

Aplicaciones Tecnológicas, S.A. offers you all the lightning protection technologies: external protection with air rods and meshes as well as ESE lightning rods, a wide range of surge protectors and the most advanced storm detector. This detector is even capable of warning of the formation of a storm in the area to be protected before the event of atmospheric electric discharges (lightning).

The ESE lightning rods protect a larger area than the air rods. When installed on a structure, they can protect both the structure and its surroundings and can also protect open areas. It should be noted that they should always be placed at least 2 metres above all the objects to be protected (including trees). They protect a maximum of 100 metres around them and there is still a danger of step voltage on unpaved ground.

The DAT CONTROLER® REMOTE lightning conductor uses the environmental electrical field as its sole power source. It is completely autonomous, maintenance-free and its operation can be checked anytime.

Protection against transient and permanent surges

According to the Application Guide of the Low Voltage Electrotechnical Regulation, the installation of surge protection is mandatory in livestock farms, fish farms and other facilities where the life of animals is endangered if electrical and electronic equipment fails. Protectors against overvoltages (POP) are installed in all lines entering the structure (electricity supply, telephone, data…) and conduct lightning current to earth, safeguarding the equipment. The usual protections of the lines (magnetothermal, differential) act too slowly and do not avoid the effects of lightning.

A Lightning Warning System can be the most effective protection measure for large outdoor areas in many cases. The ATSTORM® lightning warning system is an ideal tool for livestock farms as it allows the necessary measures to be taken in advance in order to minimize the effects of lightning.

The ATSTORM® lightning warning system evaluates the electrostatic and electromagnetic field in the area to be protected. Local monitoring is carried out by means of two types of sensors that assess the risk of thunderstorms:

The objective of the ATSTORM® system is to identify, with the greatest possible anticipation, the risk of the formation or approach of a thunderstorm to the agricultural or livestock farm, allowing timely preventive actions to be taken (evacuation of livestock, activation of alternative electrical generators…).

If you would like to know more about any of our systems, you can contact us or register for one of the information sessions on Aplicaciones Tecnológicas aimed at professionals in the sector by clicking here.