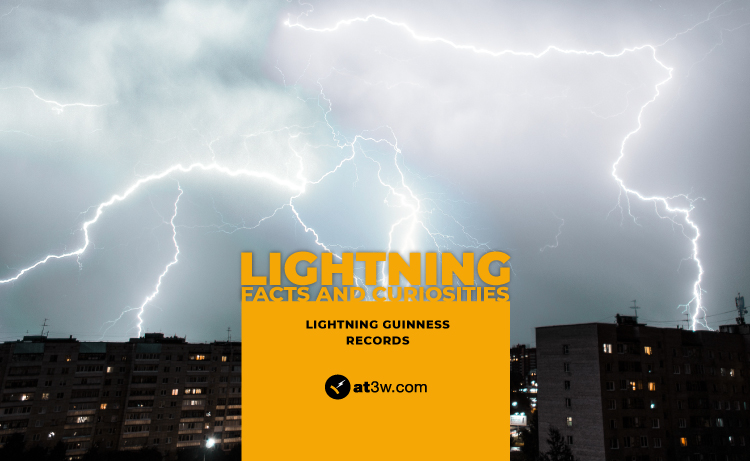 Lightning is one of the most captivating and spectacular natural phenomena. This powerful electrostatic discharge lights up the sky during electrical storms with the brightest light in our planet.

Fascination by lightning is evident: there are at least 30 Guinness Records about this natural phenomenon. In this article, we want to comment some of the most impressive facts and curiosities.

The bright light of lightning is caused by the high temperatures reached in the discharge channel. The hottest place on Earth is the air surrounding the lightning strike, heated to around 30 000 ºC which is five times hotter than the Sun’s visible surface. This high temperature also produces a rapid increment of pressure that generates the thunder, the loudest sound on Earth1.

The most common lightning, accounting for approx. 90%, is produced intra-cloud between different charged regions in the cloud. Cloud-to-ground lightning can have positive or negative polarity according to the transfer of the cloud charge. Although less than 5% of the total strikes are positive, these are the most powerful, reaching 300 000 amperes and a billion volts.

Lightning flashes are usually formed by several pulses of current, called strokes. These are responsible for the flicker effect made by some flashes. The record of strokes in a single lightning flash was recorded in the USA in 1962 and is still set at 26.

In 2019 the longest lasting lightning flash was recorded over Argentina. With 16.73 seconds in duration, it doubled the previous in 2012 over France (7.74 seconds) for a single lightning flash.

The typical length of lightning flashes is 9 km but lightning is able to travel great distances. The longest distance measured was 709 km in 2018. This particular lightning flash moved from north-eastern Argentina across Brazil to the Atlantic Ocean.

Despite the high frequency of lightning which can occur in every season of the year, they are subjected to a great statistical uncertainty especially when considering where the lightning will strike. The difficulty hinders the scientific study of this natural phenomena. To overcome this challenge, scientists developed rocket-triggered lightning. The most common method is to launch a small rocket with a grounded copper or steel wire. The electric field generated near the upper end of the wire is enough to trigger a leader extending to the cloud. The trailing wire is vaporized by the leader establishing a path of less resistance which favours the strike to the ground where the wire is attached2. Rocket-triggered lightning was first achieved in 1977 in China. However, the record for the longest manmade lightning bolt, although produced in laboratory not in open field by a rocket, was created by Nikola Tesla in his Colorado laboratory in 1899. The bolt measured 40 metres and it was reported that the thunderclap it produced was heard 35 kilometres away.

Lightning incidence pattern around the globe varies greatly. According to U.S. National Oceanic and Atmospheric Administration (NOAA), about 70% of the total strikes on Earth occur in the tropics, where the conditions are especially suitable for thunderstorm formation. The place with the highest lightning concentration is Venezuela, in particular over the mouth of the Catatumbo river where it connects with Lake Maracaibo. This area received almost 250 lightning flashes per square kilometre each year. Nonetheless, during January-April of 2010 no lightning was produced there possibly due to the El Niño/La Niña-Southern Oscillation.

As an opposite to the tropics, the North and South poles have the lowest lightning incidence. Unfortunately, lightning is increasing in the Artic due to global warming. Since lightning is responsible for the major number of wildfires, this increment can precipitate the already happening thawing of the permafrost. Experts think this event will have an enormous effect in the escalation of the climate change3,4. The most northerly lightning was detected on 13 August 2019 at 89.53ºN, only 52 kilometres from the geographic North Pole.

Wildfires caused by lightning are older than the human species. The earliest one is thought to have happened, based on the study of charred plant fossils in UK, 419 million years ago during the Silurian period, probably caused by a lightning strike. Lightning was also presumably responsible of the longest-burning fire, believed to have started 5000 years ago in a coal seam in Australia. It is still burning, now 30 metres underground.

During 1974-75 Australia suffered the possibly largest grassland fire that burned nearly 117 million hectares (corresponding to 15% of the entire continent). Some of these bushfires were ignited by the local farmers, but the great majority were directly produced by lightning strikes. Wildfires are also responsible of inducing pyrocumulonimbus clouds which are convective clouds with a large vertical extent that can cause lightning, hail and even tornadoes. The lightning produced by pyrocumulonimbus or cumulonimbus flammagenitus can cause more wildfires. The most intense activity of these pyrocumulonimbus was registered on 1 January 2020 during the strong Australia bushfires of December 2019-January 2020 that burnt 5.8 million hectares. Pyrocumulonimbus are also responsible of the aerosol injection of carbon particles into the stratosphere, in this case 400 000 tonnes which is the equivalent to a moderate volcanic eruption5. However, the highest number of pyrocumulonimbus in a single summer (17 distinct ones) was observed in the 2001 wildfire season in USA and Canada by NASA’S satellite.

Not only pyrocumulonimbus generated by wildfires can produce lightning. Some volcanic eruptions like the ones with significant plume are able to induce volcanic lightning or dirty thunderstorms. The electrical charge responsible of this volcanic lightning is produced by collisions among rock and ash in the plume, with the released water vapour also plausibly involved. The first reference of volcanic lightning is found in the correspondence of historian Pliny, the youngest who witnessed Mount Vesuvius eruption in 79 AD from the Bay of Naples. He described it as “a black and dreadful cloud, broken with rapid, zigzag flashes”.

A curious effect produced by lightning are fulgurites which can be formed when lightning discharges into the ground. They are glassy mineraloid of sintered, vitrified and/or fused sediments like sand, rock or debris. In 1996 was found the longest excavated fulgurite, extending 5.2 metres and 4.9 metres from the strike point.

However, most lightning effects are more hazardous, like the wildfires already commented. Even spacecraft are not immune to lightning. In 1969 the Apollo 12 experienced severe electrical anomalies when it was struck twice by lightning, seconds after its launching. Luckily, the mission control and the crew were able to solve it and nobody resulted harmed. NASA experienced another incident in 1987 when a lightning bolt triggered 3 unmanned rockets. Two of them followed the planned trajectories while the third, precisely the one supposed to study thunderstorms, crashed into the ocean.

Nevertheless, lightning produces around 24 000 deaths and 240 000 injuries per year6. The deadliest lightning strike in aviation killed 91 people when LANSA Flight 508 was crashed into the Amazon in 1971. The only survivor was 17-year-old Juliane Koepcke who managed to seek help. At the other end, the U.S. park ranger Roy C. Sullivan has the Guinness Record for being the person who survived seven lightning strikes. He died of causes not related to lightning.

Livestock is also very exposed to destructive the consequences of lightning since the distance between their legs makes them more vulnerable to step voltages. The deadliest registered lightning killed 68 Jersey cows sheltering under a tree in Australia in 2005. Three more cows were paralyzed but recovered few hours later.

Lightning is a fascinating phenomenon but we must not forget the great currents produced by strikes. Without the appropriate protection and prevention, lightning is extremely dangerous for people, animals, buildings, forests, among others cases.