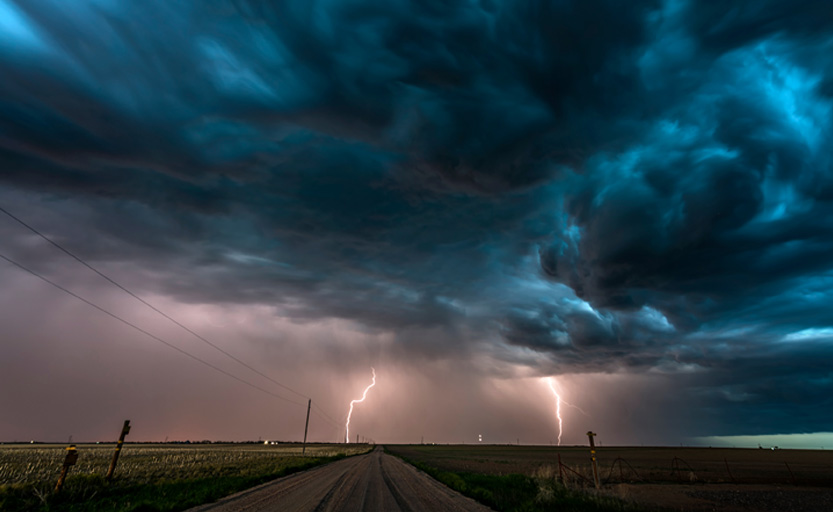 Lightning is one of the most fascinating and spectacular natural phenomena. The powerful electrostatic discharge that it represents lights up the sky during electrical storms.

Nevertheless, we must not forget that lightning strikes Earth with great force, and without appropriate protection and prevention it is potentially hazardous for people, animals, buildings and electrical and electronic equipment.

However, there are many interesting facts about lightning that are sometimes unknown. It is commonly known that metallic and pointed shapes attract lightning (hence lightning rods have that shape). But is this true? What else do we know about lightning?
In relation to magnitudes, lightning bolts reach really striking numbers: current peaks of 200.000 amperes and dozens of coulombs of charge at a voltage of hundreds of millions of volts. If compared to domestic values, in an electrical installation we usually have 250V and currents of the order of amperes. If a current of around one ampere goes through the human body it will cause serious burns and will pose a very high risk of death. However, we must bear in mind that the lightning wave is very fast, this is why there are people who manage to survive the impact of lightning.
In terms of temperature, a lightning bolt can reach 30.000 Kelvin degrees, that is to say, it can be up to five times higher than the surface temperature of the Sun. For this reason, it is understood that when a person is struck by lightning, the metals that are carried can melt.

How is lightning formed?

Lightning is formed due to an electrification of the clouds. The temperature differences inside the cloud generate updraft and downdraft air currents. The small hail particles and ice crystals are carried by these air currents, collide with each other and are charged electrically. At the same time, the wind transports the particles with positive charges towards the top of the cloud and the negative charges towards the lower part.
Due to the influence of these charges, the Earth’s surface under the cloud also acquires positive charge, which generates an electric field that follows the cloud.
Because air is not a good conductor of electricity, the accumulation of charges must be very big so that the electric field is strong enough and lightning can form. When this happens, an ionized air channel begins to form between the cloud and the surface. The charges attract each other until the path closes and there is a rapid exchange between charges between the surface and the cloud. Metallic and pointed elements, if connected to ground, accumulate more charge and therefore become preferred points of lightning impact. Why does thunder sound?

Thunder is the acoustic effect of lightning, which occurs because the heating of the beam causes an ultrasonic pressure wave.
When the air along the beam channel is heated to such high temperatures, it expands and contracts rapidly, causing the familiar burst of thunder. Literally, we could say that lightning breaks the air in its path.
Sometimes we are asked if it is possible that lightning strikes if there is no thunder. The answer is that this is not possible, thunder is the direct result of lightning. If we see lightning but do not hear thunder, it is only because the discharge is very far away.

Is it possible to have lightning without rain?

Although the striking of lightning is frequently related to storms which bring rain, it may happen that it does not rain, but that an electrical storm occurs without precipitation. This phenomenon, which is known as a dry storm, is produced because precipitation is not abundant and evaporates before approaching the ground.
Sometimes, dry storms pose a danger to people who are outdoors, since without rain no risk of lightning may be perceived. In this regard, it should be noted that many of the deaths caused by lightning strikes take place before the storm arrives accompanied by rain or when it has stopped raining, again because it is believed people are out of danger. They also pose a great risk of forest fires.

According to the points between which lightning is produced, the following classification exists for types of lightning:

Isokeraunic levels: Where does most lightning strike and why?

Isokeraunic leves indicate the frequency of lightning strikes in a geographic area. An isokeraunic map can indicate storm days or density of discharges per square kilometer per year, and is generally represented by lines of equal value, similar to isobar lines that are used in weather maps.

The countries with the highest isokeraunic level are those that register warm temperatures and a high degree of humidity. As we have seen, storm clouds (cumulonimbus) are formed by the electrization of evaporated water. Countries such as Venezuela, India or Democratic Republic of Congo have a very high number of lightning strikes compared to the world average, whereas at the poles the incidence is minimum.
In this regard, some studies suggest that global warming and pollution could result in an increase of electrical discharges.
We cannot control the electrical activity in the atmosphere, so it is very important to apply the appropriate protection systems to ensure safety of people and infrastructure. Nowadays there are sophisticated lightning detection systems such as ATSTORM that allow for alerting of the risk in order to take preventive measures in advance.