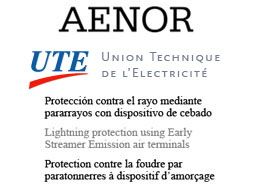 Spanish and French ESE air terminals standards are already in force. Similar updating processes are in course in other European countries.

A new edition of the Spanish and French ESE standards – UNE 21186 and NFC 17-102 – have recently been published. One of the most important points included in these new ESE national standard editions are the requirement of a withstanding current test prior to the advance time test.

In previous versions, both the Spanish and French standards have already included common aspects with the European standards EN 62305-2 and -3, such as the risk assessment and certain aspects of the installation. In the new editions, in order to simplify the reading and use, explicit references to the aforementioned European standards have been replaced by text, as CENELEC requested.

In the same way, similar updating  processes of the national standards about lightning protection using Early Streamer Emission air terminals are in course in other European countries, such us Portugal and Slovakia.