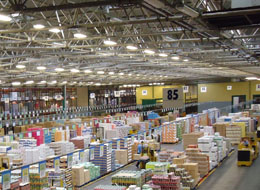 Our surge protection devices ATCOVER and ATLINE have been installed to protect the facilities against transient overvoltages.

After a thunderstorm happened near to one of the largest and most modern logistics centre of the food sector in Spain, the electrical fire protection devices, which are essential in this kind of facilities, were seriously damaged.

In order to avoid injuries and economical consequences in the future, the company has trusted Aplicaciones Tecnológicas to design and install the internal protection against lightning. The project has paid special attention to the following: