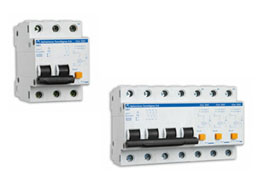 Aplicaciones Tecnológicas launches new protective devices against power frequency  overvoltages with integrated MCB for 6, 10, 16 and 20A nominal current. Due to their characteristics, these new protectors are particularly suitable for protecting common areas of residential buildings or complexes.

IGA TEST protectors actuate when detecting a temporary overvoltage, for example a neutral failure, cutting off the power supply and thus protecting the equipment installed downstream. Like the other IGA TEST devices, these new protectors can be installed in combination with ATSUB-D, which protect against transient overvoltages.

Certified according to the specifications described in the European standard EN 50550 – Power frequency overvoltage protective device for household and similar applications (POP), our IGA TEST protectors have been tested by ÍTACA, official and independent Laboratory of Electrical Safety.

New IGA TEST protectors for low current are available for both single and three phase systems.