What can a lightning protection system do for your company? 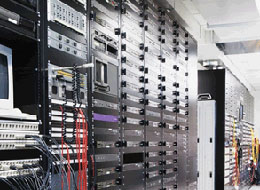 The global damage associated with lightning strikes is estimated in billions of dollars. Having an adequate protection prevents serious economical losses.

Every single second there are between 75 and 100 lightning strikes in the world with an intensity of 20,000 amps on average (some of them up to 200,000). An estimated 24,000 people are killed annually and 240,000 are injured due to this phenomenon. In terms of economical losses, statistics reveal that damages caused by lightning add up to billions of dollars. Only in the US, material damages are estimated in the order of $4-$5 billion.

A standardized lightning protection system significantly reduces these risks and is particularly recommended for those structures that contain substantial electrical and electronic equipments, such the industry sector.

Having adequate lightning air terminals, surge protection devices and earthing systems will prevent, to a large extent, damages in buildings and equipment caused by direct lightning strike or fire caused by a discharge. Also, it will avoid very high costs due to service interruptions, stops of production processes or switching off and on again certain machinery if the control equipment is affected by lightning.

Additionally, and as a preventive protection, storm detectors will help to activate the necessary measures in case of lightning, minimizing the risks.