AT-8191: The surge protection set that meets the requirements of ENDESA 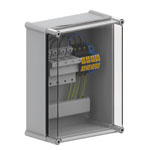 Lightning overvoltages are impulsional type and, mainly if they are due to direct lightning strikes to the line, the associated current is very high, reaching even tens of kiloamps. Usual protections such as Circuit Breakers or Residual Current Devices are too slow for this type of perturbation: a large part of the current has already enter the line when they activate, possibly causing important damages to the equipment.

Many standards and regulations point out the need of protecting lines against this type or overvoltages. Now, the electricity company ENDESA has also published a handbook prescribing the need of using surge protectors for power supply lines against direct lightning strikes. Such protectors (Type 1) should withstand 25kA impulses to the lines leaving a residual voltage lower than 1,5kV, while neutral should withstand 100kA leaving a residual voltage lower than 2,5kV.

Aplicaciones Tecnológicas, S.A. surge protection set protects the three lines and neutral against overvoltages due to direct lightning strike, lowering the residual voltage to the values indicated by ENDESA. Most electric and electronic devices in the market are designed for withstanding surges with those voltages, but not higher. Reference AT-8191 includes a watertight box, fuses and the protectors already wired, but they are also supplied separately.  Reference AT-8091 contains the protectors forming the set: one ATSHOCK N (ref. AT-8399) and three ATSUB 100 (ref. AT-8256).