Dat Controler® Plus lightning rod at the Cathedral of León (Spain) 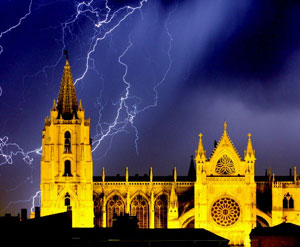 Few weeks ago, the cathedral of Leon (Spain) suffered a direct lightning strike to its north tower. Our Dat Controler® Plus ESE air terminal installed at the tower absorbed the lightning discharge, preventing damage to the building and its facilities.

The cathedral, dating from the 13th century, is located at the highest part of the city, so it is very susceptible to receive a lighting strike, especially in this season when the number of storms increases.

Lightning protection on buildings and monuments with important historical value is essential to avoid serious damages. On May 27th of 1966, precisely a fire driven by a spark caused by lightning destroyed the roof of the temple’s tallest naves.