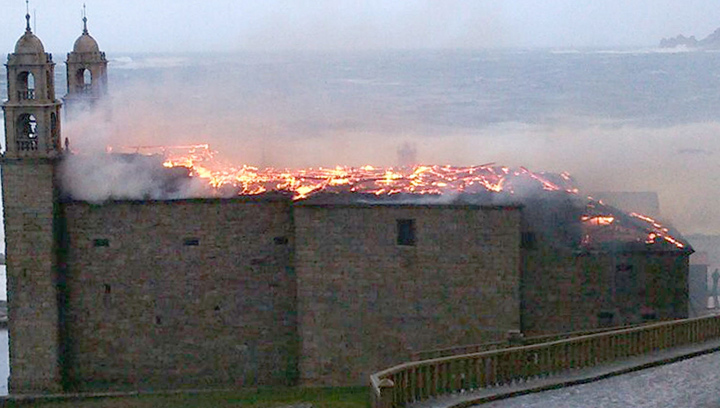 Christmas Day dawned in Muxia, close to the Way of St.James in Spain, with its ancient Shrine on fire, after a night when around 200 flashes were recorded in the area. This piece of news had a high impact in Spain and many reports were published, showing in many cases the poor existing knowledge about lightning and how to be correctly protected against its consequences.

The Shrine was provided with two Franklin rods, installed on the two towers facing the sea. Any picture leaves the first doubts about the protection system: rods are clearly below the top of the towers they are supposed to protect. No air terminal, from any type, is able to protect a structure above itself since such structure would be within the lightning path. On another side, even in case the rods were correctly installed, they would protect the towers but not the whole church, so lightning could have struck the wooden roof, thus starting the fire.

First news indicated that lightning had struck a nearby transformer "transmitting the fire through the cables", which is not possible. If the transformer had not protection and caught fire, then the church could have ignited due to a spark of that fire. If lightning struck the line and through such line the current entered the structure, then fire could have started due to a failure caused by the deficiencies of the electrical installation and the lack of surge protection.

Anyway, what is absolutely wrong is the concept that lightning air terminals are more dangerous, "because they attract lightning", than leaving the structure unprotected. In fact, lightning approaches to the ground and only during the last meters the point of impact is determined. A correctly installed lightning protection system provides a preferred point of strike and a safe path to the earthing. If there is no protection then lightning will strike any other point of the same structure, searching a way to the ground through any metallic part, service line or electric arc through the air, causing irreparable damages as in this centenary church.

+Info about the installation of lightning protection systems