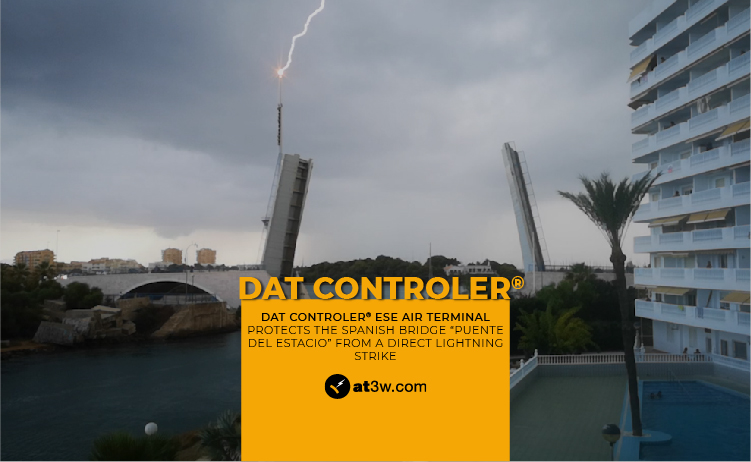 Drawbridges allow the passage of high boats at specific times. In their movement they are transformed into vertical walls and they can reach a great height, making them clearly preferential points of impact for lightning strikes.

One of them is the Spanish bridge “Puente del Estacio”, which takes its name from the canal that links the Minor Sea with the Mediterranean Sea. The first “Puente del Estacio” was built in 1969 and was a swing bridge. However, in 2003 it was replaced by a 60-metre long bascule bridge, which is raised every two hours to allow boats over 7 metres high to pass.

Bridges of this type are difficult to protect due to the mobility and change of orientation of the structure at risk of lightning strike. However, in this case, the protection has been achieved by using a lightning arrester with a DAT CONTROLER ESE (Early Streamer Emission) air terminal on a nearby high-rise structure where the bridge control system is located. Thus, the bridge remains within the protection radius of the lightning arrester even when it rises and reaches its highest point.

This is what happened last August, when the Aplicaciones Tecnológicas´ DAT CONTROLER lightning rod installed in the control cabin intercepted the lightning strike during the lifting of the bridge, preventing damage that could have left the structure unusable.

What is a lightning rod and how does it work?

A lightning rod is a lightning protection system, used to protect people, buildings and installations from lightning strikes in the event of a thunderstorm.

Lightning arresters work by capturing lightning to prevent it from striking any object within the protection area. These elements of the external lightning protection system consist of a metal object, usually of a pointed shape, connected to a system of down conductors and grounding, which safely conduct the current and dissipate it.

The ESE lightning rod was a major technological innovation in lightning protection. Its operation is based on the electrical characteristics of lightning formation, taking advantage of existing knowledge of the physics of lightning to achieve a larger area of coverage.

DAT CONTROLER® PLUS from Aplicaciones Tecnológicas is a lightning arrester with an ESE device, that is, it uses the atmospheric electric field as a power source and emits high voltage pulses to form the ascendent path at the right moment.

It has been tested to the highest quality standards, complying with all regulatory requirements, going even further with tests such as insulation under heavy weather conditions, rain, salt mist etc and exceeding by far the standard withstand test for current impulses to guarantee its operation under the most adverse conditions.

DAT CONTROLER® REMOTE is the latest contribution of Aplicaciones Tecnológicas to lightning protection. In addition to all the advantages of the DAT CONTROLER PLUS lightning rods, the DAT CONTROLER REMOTE offers the possibility to check the status of the lightning rod at any time and from anywhere. This innovation not only makes it possible to monitor the arrester, but also saves time and maintenance costs for the installation.

Why installing a lightning arrester?

The purpose of the lightning protection system is:

1) To capture the lightning strike

2) To conduct the lightning current safely to ground

3) Dissipate the lightning current within the ground

4) Protect against the secondary effects of lightning.

In a world of increasingly complex buildings and devices, lightning is a risk. A lightning discharge can damage buildings and cause electronic equipment to fail. It can also cause fire and very serious economic losses.

What are the effects of lightning strikes?

How to know if I should install a lightning rod

If you have any doubts about whether or not to install a lightning rod system, Aplicaciones Tecnológicas will carry out a study based on the regulations and your specific needs. You can contact our technical staff by clicking here.