New surge protector with certification of approved product from Iberdrola 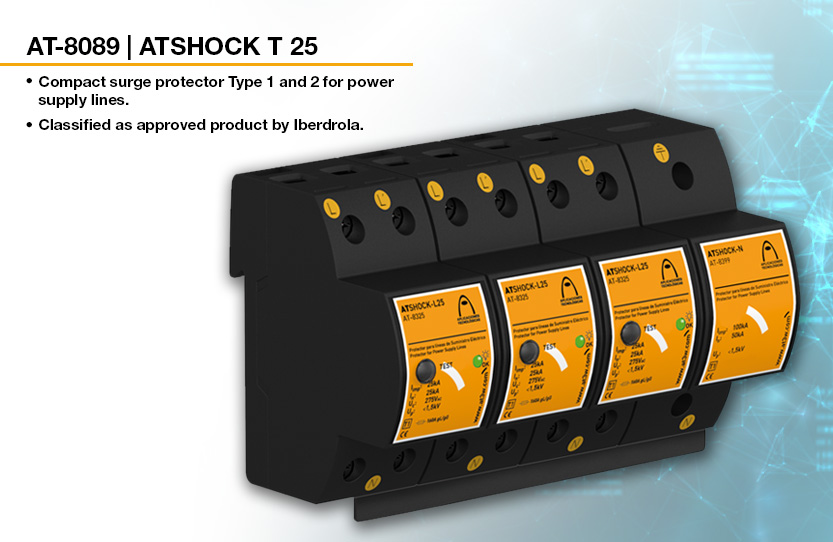 The IBERDROLA regulates the technical characteristics that new installations must comply with in order to be connected to its distribution network: Type 1, comply with the UNE-EN 61643-11 Standard, 230/400 Vac, 3 Phases + Neutral, suitable for TT system and based on technologies that do not produce gas emission or generate inadmissible leakage currents due to aging, among other characteristics. The ATSHOCK T 25 surge protector complies with all specifications and is therefore among the products recommended by the Spanish electricity company.

The ATSHOCK T 25 is a new compact and combined surge protector (Type 1 and Type 2) for power supply lines at the building entry point, which protects against overvoltages produced even by direct lightning discharges. This device is tested in official and independent laboratories according to the UNE-EN 61643-11 standard.

Among the six devices that have this same rating in Spain, the protector ATSHOCK T 25 differs from the rest in that it has a non-consuming light status indicator, which indicates not only if the equipment is in perfect condition or not, but also if power is being fed to the electrical panel or not. In addition, unlike the rest of protectors that are monobloc, the protector ATSHOCK T 25 is composed of several devices combined in one. In the event of failure of one of the parts, it allows you to replace only that unique part and not the entire block itself, significantly reducing time and maintenance costs.