Rise of lightning damage during the storm season 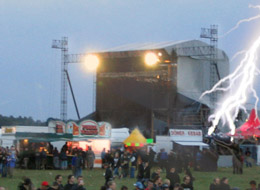 At least 51 people were injured by being struck by lightning while attending a heavy metal festival in eastern Germany, said local authorities. According to DPA, among the 51 affected, nine were seriously injured. The thunderstorms that these days fall on Germany led to another tragedy, when lightning killed three women who played golf near Kassel in the center of the country.

In addition to the external and internal protection against lightning suitable measures, having information about lightning storms is essential for workplaces or sensitive locations. Storm detectors are particularly useful for the people who are responsible for taking decisions (national or local governments, private or public companies) involving people in open areas: workplaces, sports or open air activities, competitions, multitudinous events, farming, ranching or fishing activities.