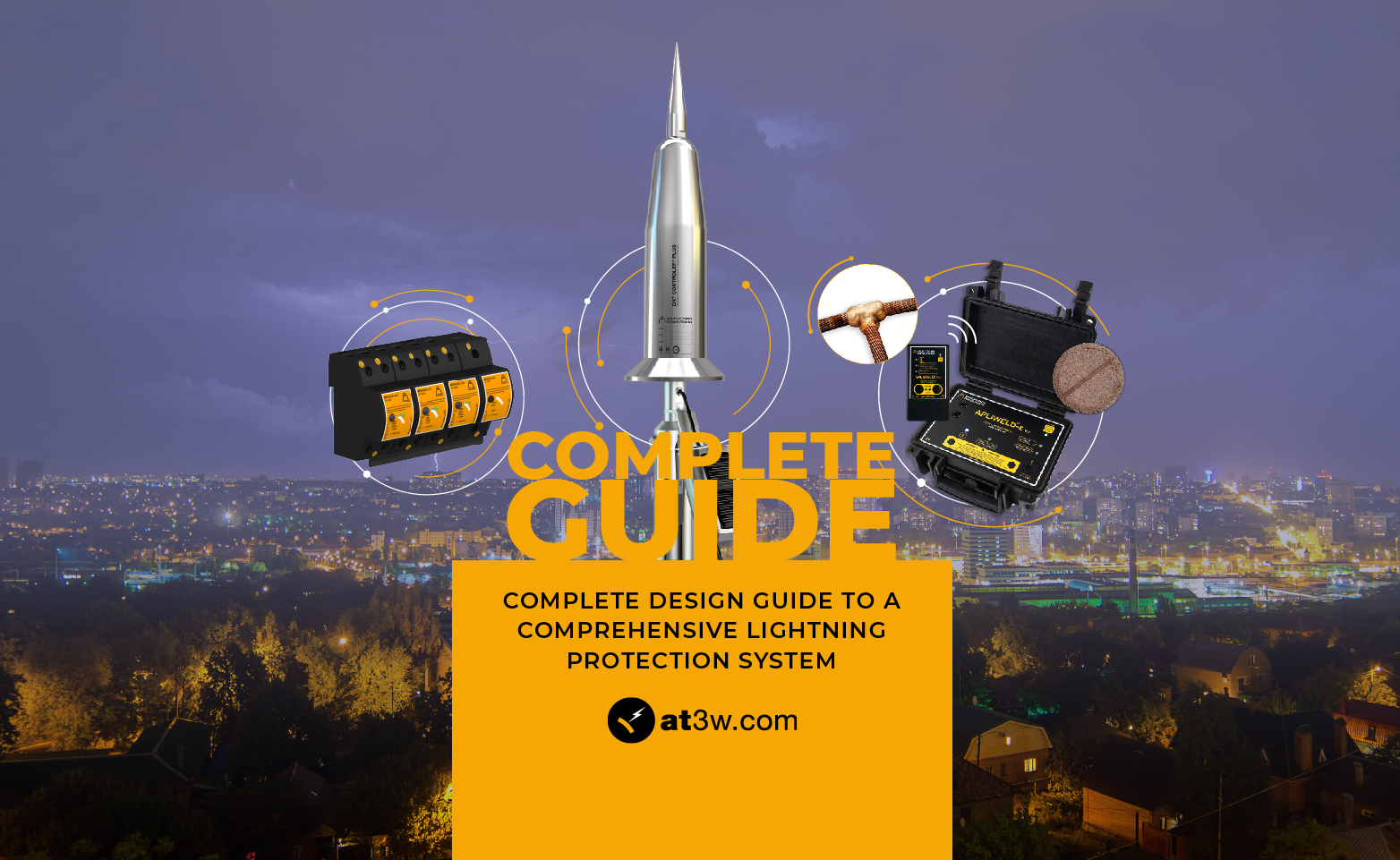 Lightning is one of nature’s most destructive events, so it is essential to protect people, the environment and infrastructures from its effects, as well as guaranteeing the continuity of services and safeguarding material and cultural assets. The purpose of a lightning protection system is to capture lightning, conduct its current safely to earth, dissipate in the ground and protect against the secondary effects of lightning.

The lightning protection level of a LPS considers both the lightning current parameters and the probability of not exceeding the maximum and minimum design values in the event of a thunderstorm. These maximum and minimum values are used for the dimensioning of the LPS elements (thickness of the metal sheets, current capacity of the surge arresters, separation distances against dangerous sparks), for the test parameters and for the positioning of the LPS sensors.

The following is a guide to design a comprehensive lightning protection system, based on Aplicaciones Tecnológicas S.A.’s recommended products.

An external lightning protection system consists of one or more lightning rod ends, two or more down conductors and an earthing system.

Early Streamer Emission (ESE) air terminals are characterised by continuously emitting an upward tracer to intercept the downward lightning tracer before any other element within its protection radius. An ESE device with a longer lead time in the formation of the upward tracer (more time in advance of the ignition), captures the downward tracer at a greater distance, protecting a larger area. The protection radius of a lightning rod for each height is calculated with the advance time of the lightning rod and the level of protection against lightning (Technical Building Code, CTE; the UNE 21186 standard; NF C 17-102 and NP 4426).

The DAT CONTROLER® air terminals of Aplicaciones Tecnológicas S.A. are equipped with the latest technology in ESE devices. In addition, the smart air terminal DAT CONTROLER® REMOTE has self-diagnosis of the head and communication via IoT of the result to ensure the correct operation of the equipment. 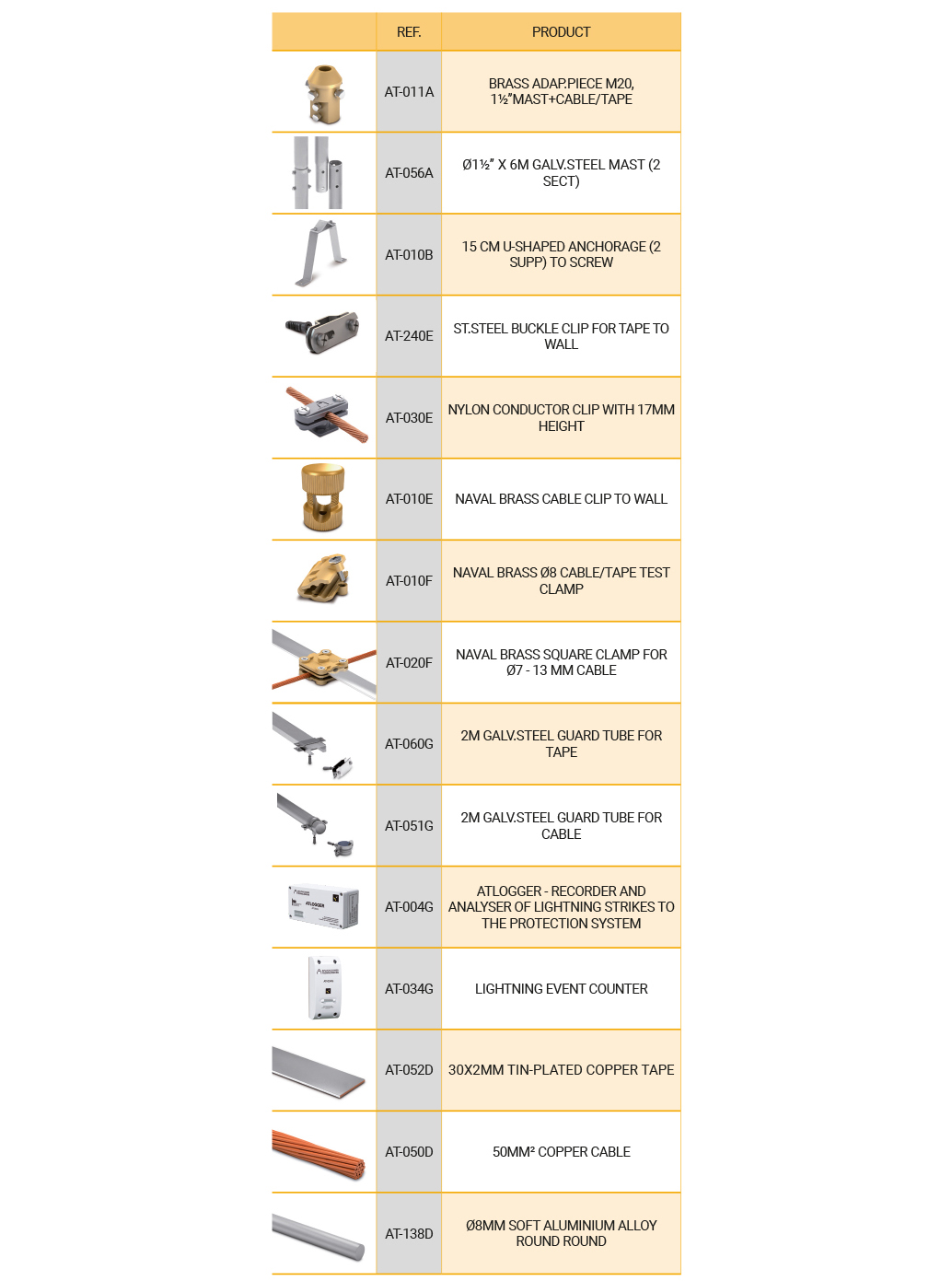 The earthing system is an indispensable element of the external lightning protection system, responsible for dispersing the lightning current into the ground. The correct functioning of the earthing system depends on the conductivity of the ground. This conductivity is mainly electrolytic in nature due to the salts dispersed in the water that permeates it. It can therefore be increased by improving the water absorption and retention capacity and increasing the concentration of soluble salts.

We also have the conductivity ground enhancing gel, CONDUCTIVER PLUS. It contains an electrolytic base that increases conductivity and water absorption and retention capacity. It is a gel that is not very soluble and very hygroscopic, especially recommended for stony soils.

In high resistivity soils or industries that require a low earthing resistance (such as computer installation earthing, radiofrequency equipment, transformation centres, etc.), APLICEM conductive cement is capable of increasing the conductive surface of the electrode, maintaining it indefinitely. 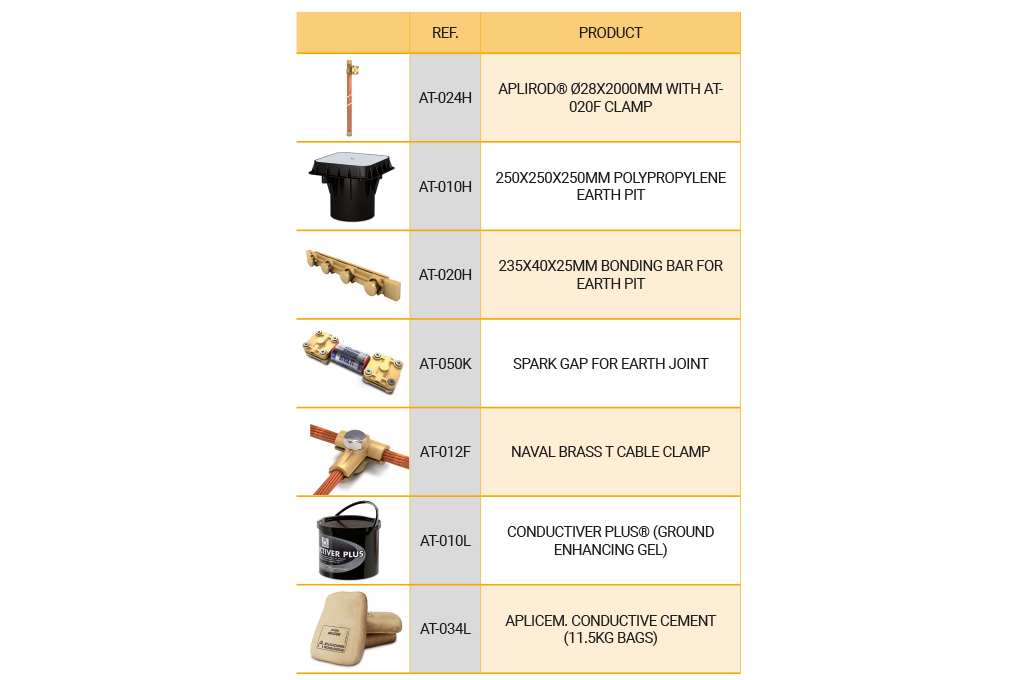 In addition, exothermic or aluminothermic welding is recommended for the interconnection of conductors, as the molecular bonds guarantee an effective and durable earthing. With its innovative tablet format, electronic initiators and remote ignition, APLIWELD® Secure+ is the most efficient and safest exothermic welding solution on the market. Various moulds, clamps and accessories are available in our catalogue.

An internal lightning protection system must have an adequate overvoltage protection installation as well as other measures to minimise the destructive effects of lightning (equipotential bonding, shielding, etc.).

Although transient overvoltages can have different origins, the most destructive are caused by lightning. These very short-lived voltage surges are introduced into equipment via power, telephone, television or data supply lines. Overvoltage protection maintains continuity of service by reducing the likelihood of safety incidents to an acceptable level for people and property. Surge protection devices are characterised by being inactive when the electrical signal is normal, but respond instantaneously to transient surge peaks, conducting the lightning current to earth and protecting equipment. Once the surge is absorbed, the DPS returns to its idle state. The types of overvoltage are as follows: 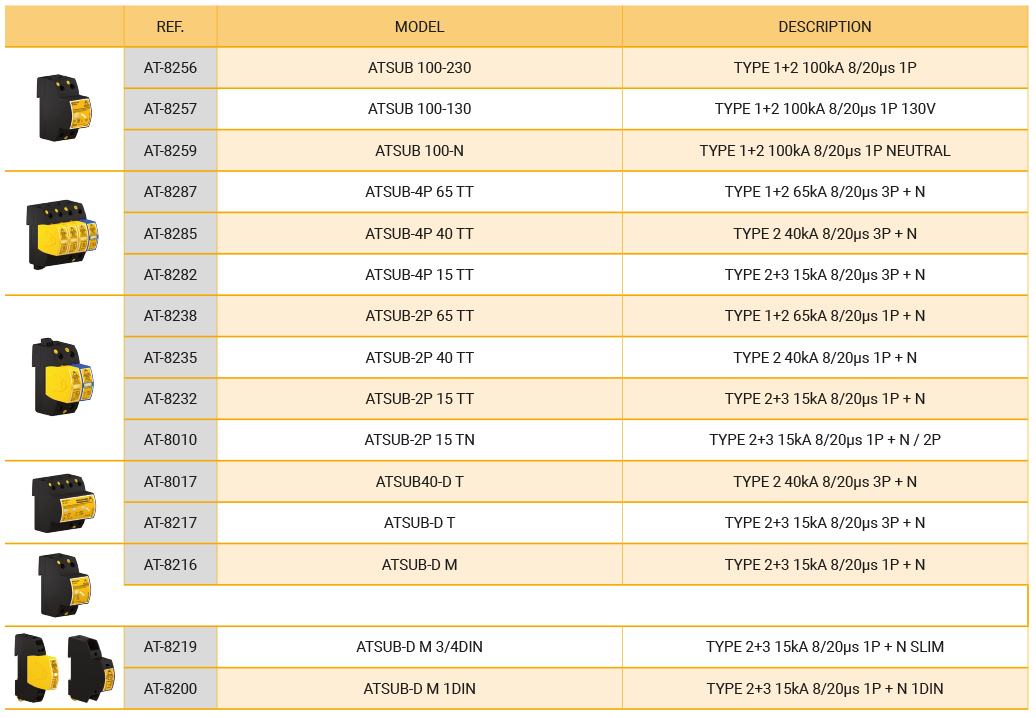 The protection of power supply lines can be carried out with overvoltage protectors of the ATSHOCK, ATSHIELD, ATSUB, ATCOVER and ATCOMPACT series of Aplicaciones Tecnológicas S.A. The ATSHOCK protectors are type 1 and must be used in combination with the ATSUB and/or ATCOVER series. The ATSHIELD series are type 1+2 protectors, which absorb direct lightning current leaving low residual voltages. The ATSUB series has 1+2, 2 and 2+3 protectors. The ATCOVER surge protectors are of type 2+3. On the other hand, the ATCOMPACT series allows all the above protectors to be combined within an already wired cabinet, which is particularly useful in distribution boards without sufficient space.

On a more specific level, the ATPV series is designed and adapted for the protection of photovoltaic panels, while the ATVOLT series protects DC power lines. 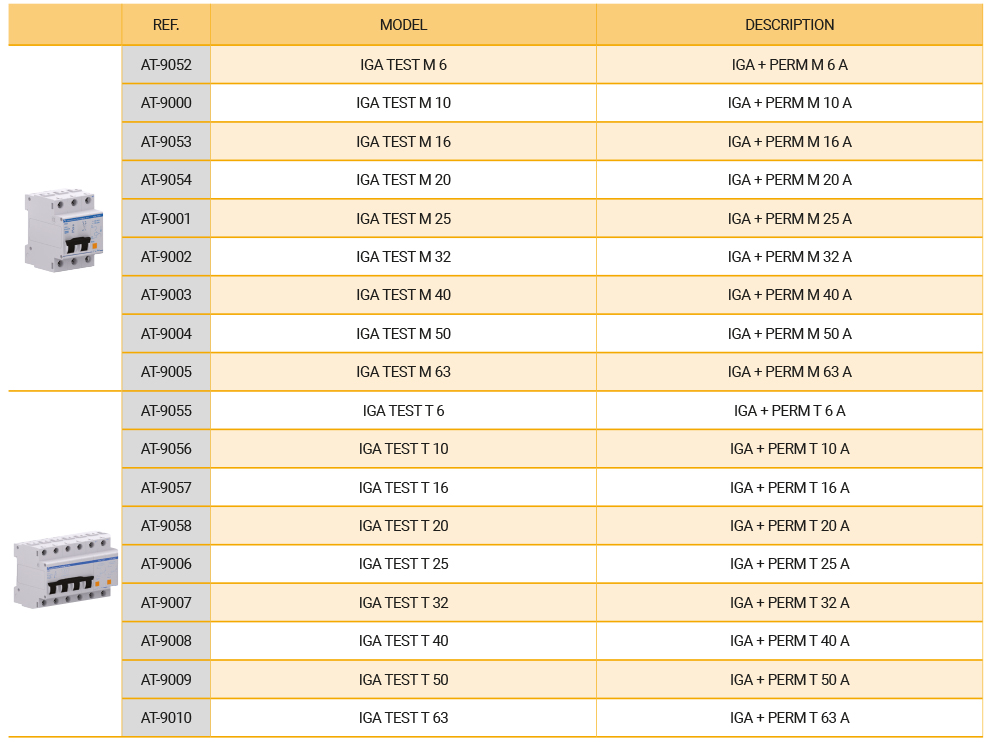 IGA TEST D surge protectors have the IGA circuit breaker with a slower tripping curve (D-curve). They are recommended for high consumption buildings (offices, hotels, schools or clinics) where an IGA TEST protector could disconnect the line without a permanent overvoltage having occurred.

ATPLUG CONTROL is a plug-in surge arrester that protects against permanent and transient overvoltages and undervoltages of type 3.

Aplicaciones Tecnológicas S.A. offers the most advanced technologies and materials for the design of a complete lightning protection system. If you would like more information about our products, you can contact our experts at the following link.